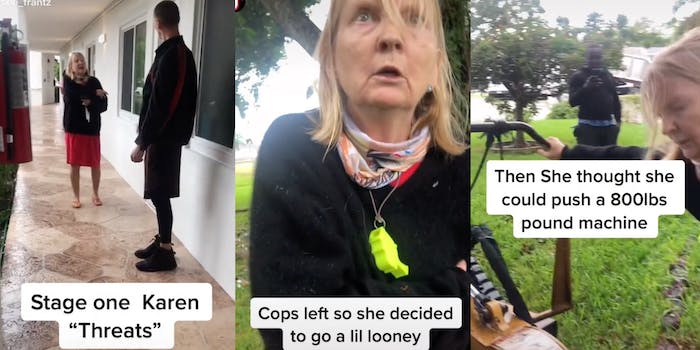 ‘You’re older than me but you’re acting younger’: ‘Karen’ harasses landscapers, grabs at their equipment in viral TikToks

Police had to threaten her with jail to make her stop.

A series of TikToks showing an elderly woman getting upset over yard work at her apartment complex has viewers locked in a debate.

TikToker @i_see_frantz shared the videos from a job he was hired to do at a Florida apartment complex, which seemed to involve either removing or trimming the roots of a large tree in the yard.

One woman took issue with this and took it out on the workers, initially screaming at them under the guise of being concerned for their safety.

“You’re on our property and you don’t have to say anything to me. And I don’t need to talk to you. Right now, your boy—your young man—that very good man, you had a fucking electric saw in the thunder and rain!” the woman shouted at one of the workers.

“It’s gas-powered,” he explained as she walked away.

She eventually came back and complained that she was treated “idiotically.”

“I’m older than you, you’re on my property,” she continued screaming. “You introduce yourself properly, young man, or you’re out of here.”

“You’re older than me, but you’re acting younger than me,” the man calmly replied.

The cops came out to handle the situation, and the woman seemed perfectly capable of rational conversation at that point, but as soon as they left, things escalated once again.

While the men were prepping to get to work on the tree, she attacked their machinery, trying to stop them from working. The man filming got in between her and the equipment in an attempt to prevent things from getting dangerous really quickly, but that just enraged her further.

“You don’t know what you’re doing, come on!” she yelled, continuing to push at the active machinery. “I’m worried about you.”

The police had to return, and the woman again suddenly became perfectly coherent and calm.

“Listen here, you come back out here and start touching their equipment, you are going to go to jail,” the officer told her. “I don’t care if you agree or disagree. It’s not your job to come out here and tell them what they can and can’t chop down. They’re just trying to do their job.”

Some viewers were quick to defend the woman simply because she’s older.

“You boys go buy this lady some flowers and a card and don’t judge her when you get older things happen to you you can’t control,” wrote @jwjames504.

“These disrespectful, condescending guys,” @belladonna850 scolded. “They start the video after she’s angry. Then keep her angry. It’s gaslighting.”

But far more people expressed frustration with the woman’s refusal to let the workers do their job—especially since she seemed fully capable of switching on a dime whenever police were involved.

“Those men were extremely patient. She followed them and put herself and them in danger,” @shamar528 explained. “She was calm when the woman cop told her she would be arrested.”

According to @i_see_frantz, the woman did eventually begrudgingly step aside after the cops got involved the second time.

“She had to watch us do our job from [afar] as she cried but TikTok won’t allow me to post it due to vid guidelines,” he wrote.

The Daily Dot has reached out to @i_see_frantz via TikTok comment.