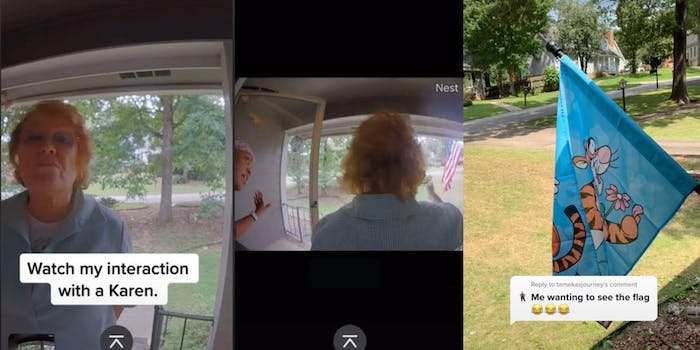 ‘Ma’am worry about your home not others’: Karen criticizes neighbor for having a Tigger flag in viral TikTok

Yes, Tigger as in the lovable tiger character from Winnie the Pooh.

A woman on TikTok went viral after posting home security camera footage of a Karen telling her she didn’t like her Tigger flag. Yes, Tigger as in the lovable tiger character from Winnie the Pooh.

The TikTok, posted by @tizzybizzy92 or Ambrosia, shows an older white Karen knock on Ambrosia’s front door to offer her unsolicited opinion of the flag, which isn’t visible in the initial footage.

“I want to talk about this Tigger flag,” the Karen began. “I don’t like it.”

“Tigger as in Winnie the Pooh?” one viewer commented on the TikTok, which Ambrosia confirmed.

Ambrosia seemed taken aback in the footage, scoffing before seeming to humor the Karen. She asked her why she didn’t like the flag.

The Karen said she thought the American flag also hanging from the porch was “real nice,” and pointed out how she wasn’t saying anything about how the shrubbery was cut or the backyard. But the Tigger flag was where she drew the line.

“And we have rules,” the Karen said. “I don’t want to have to go find out what they are, but I don’t like that.”

Ambrosia pointed out that there wasn’t a homeowner’s association in their neighborhood, but the Karen insisted there were “rules for the community.”

“I’m just saying I don’t like it. It makes it look tacky — it makes the neighborhood look tacky,” the Karen continued about the flag. Ambrosia wasn’t buying it.

“It doesn’t, but that’s okay,” she replied. “You’re allowed your opinion.”

The Karen left, saying she was going to “find out” about those rules.

Viewers weren’t buying it either.

“What’s tacky is walking up to someone’s house just to tell them what you don’t like about it,” one user commented.

Others commended Ambrosia for handling the situation so calmly.

“Wow! I am just wow!! You handled her so well. Better than I would [have],” one viewer said. Another commented, “You handled that so well. She was looking for an argument and you ruined her day by not giving it to her.”

Several people understandably wanted to see the Tigger flag that the Karen found so offensive. Ambrosia revealed it in a follow-up TikTok.

Ambrosia did not respond to the Daily Dot’s request for comment.