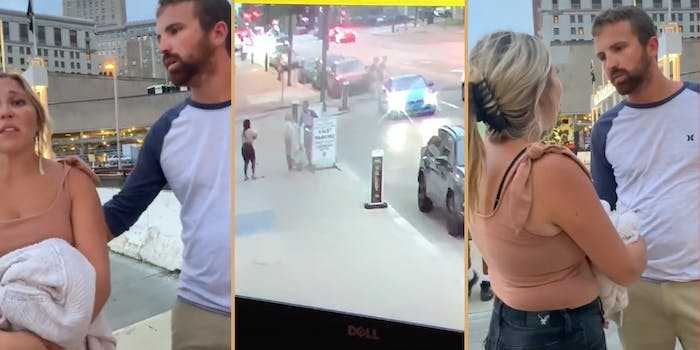 ‘Y’all ran my dog over!‘: Karen couple runs into TikToker’s dog with scooter in viral TikTok

They can be seen riding away after, but she tracked them down to confront them.

A woman uploaded a video on TikTok showing a couple running into her dog with a scooter. She confronted them about it in another video.

The first video was uploaded on Sunday by user China Monae (@chinamonaepoppin) and shows the aftermath of the incident. The TikToker claimed via text overlay that they ran her dog over with a scooter and fled but that she chased them down to confront them.

The man in the video says he doesn’t believe he ran the dog over and asks her, “Where even is your dog?” While the woman in the video looks concerned as the man continuously tries to whisper in her ear.

Monae tells them that she is calling the police as the man seemingly tries to pull the woman away. The TikToker alleged in the text overlay on the clip that the girlfriend “knew she was wrong and they were both drunk.”

Monae later posted a followup video in which she says that she was taking her dog for a walk and the “next thing you know, they just came up in between me and my dog. Her leash ended up hanging on to the scooter, they ran her over, fell on top of her and everything.” Monae says she took her dog to the hospital and that she is OK. Monae included a photo slideshow in this video; in the photos, her dog can be seen with wounds.

In a third video, Monae posted security footage featuring the incident itself. The video shows Monae walking her dog, who is leashed, down the street. Two people on a shared scooter seemingly ride into the dog’s leash, get caught in it, and pummel on top of the dog.

The text in the video alleged that after they fell on top of the dog, the duo weren’t “even trying to help me, they were too busy trying to pick up the scooter.” Monae also claimed through text in the video that she asked for help and that they just ignored her. The duo can be seen riding away on the scooter in the clip. Monae claimed via a voiceover that she was trying to get their information when they left the scene.

The Daily Dot reached out to Monae for comment but did not immediately hear back.