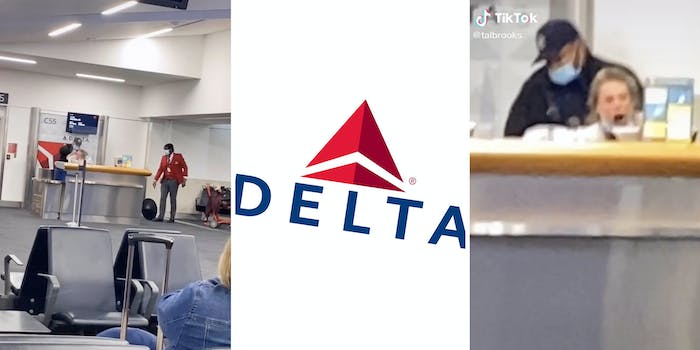 'This episode of 'karen' was filmed in front of a live audience.'

A woman was apparently arrested at Hartsfield-Jackson Atlanta International Airport at a Delta Airlines gate after allegedly spitting on Delta employees and saying the N-word.

In a TikTok posted by Talia (@talbrooks), a white woman is seen writhing in an airport police officer’s arms as he restrains her. She continues to resist him and the pair fall into the gate’s boarding desk. The woman then screams as she is apparently escorted out the door of the gate with only one of her shoes on.

“Are you arresting me?” the woman asks the airport police officer. “Yup,” he responds. Multiple people seated at the gate watching laugh at her.

Talia captioned the video saying that Delta “made [her] day by arresting this racist.”

In the video, the TikToker appears to walk up to two men near the gate and asks them if they know what happened. They say that the woman might be inebriated and said that she was “hysterical.”

Talia commented on the video saying that “everyone watching started clapping and cheering” after the woman was escorted out, and clarified that she hadn’t met the men that she spoke with in the video before. She also said that a gate agent retrieved all the woman’s belongings at the gate, “including the shoe,” and took all of it away in a wheelchair.

Commenters on the video loved the camaraderie of everyone sitting at the gate.

“The collective laugh made this feel like a 90s sitcom,” @kleopotra commented.

“This was filmed in front of a live studio audience,” @grahamsdaddy wrote.

“They’re just calmly filling you in like you walked into a movie late,” @quickballs commented.

“Everybody saying ‘ooooh’ when he slams her on the desk,” @thejohnrichter wrote.

“This episode of ‘karen’ was filmed in front of a live audience,” @plasticbells joked.

The Daily Dot has reached out to @talbrooks via TikTok comment and Delta Airlines via email. The Daily Dot has been in contact with Hartsfield-Jackson Atlanta International Airport and is waiting on a comment from airport police.