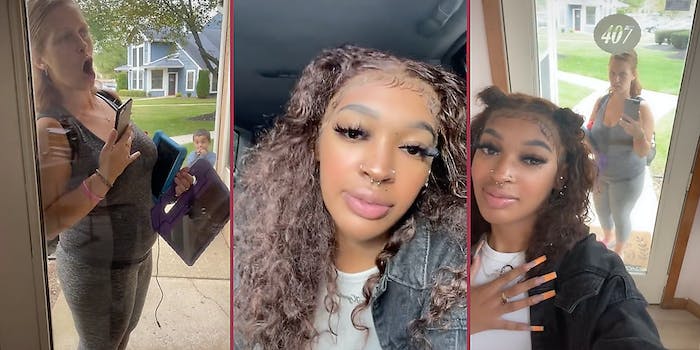 ‘You mad because my titties nice?’: ‘Karen’ allegedly rips Black TikToker’s wig off over her outfit

'She's mad because I'm getting my lashes done, and her kids see me through the window.'

A viral TikTok video shows a white woman seemingly berating two Black girls through a store window. One of the girls alleged the altercation ended with the woman snatching her wig off.

TikToker @kywxlli filmed and posted the video, which has over 500,000 views, and it shows a woman standing outside a lash studio with her phone in hand as she records what’s going on inside.

“So she’s mad because I’m getting my lashes done, and her kids see me through the window,” the TikToker says as she films the woman.

“This is what I have on,” the TikToker says, showing off her outfit in a full-length mirror. She is wearing a white crop top, a jacket, and Nike-branded high-waisted leggings.

Her companion says the woman was complaining about “cleavage,” to which the TikToker says: “Ooh, you mad because my titties nice? Is that what it is?”

It is unclear what the woman is saying as her words seem to be muffled through the glass, however, she appears to be incensed and screaming. “She’s literally out of her mind,” the TikToker says.

Following a brief jump in the clip, the TikToker is now sitting in a car with an “update” on the altercation. “This bitch just ripped my wig off,” she says.

She pulls her hair back to show a portion peeled away from her head, though it’s not evident how the situation escalated to physical violence.

The Daily Dot reached out to @kywxlli for comment.