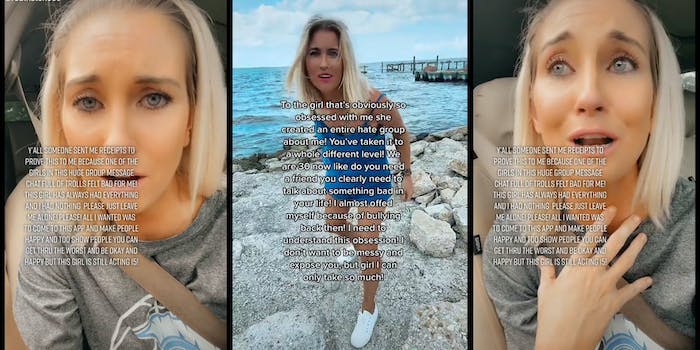 ‘Mean girls will always be mean girls’: TikToker claims her former high school bully has a Facebook group dedicated to reporting her account

Twelve years after high school, she says her bully is still trying to hurt her.

This story contains mentions of suicide and PTSD.

In a viral video, TikToker Robin Stone pleads for help concerning a Facebook group cyberbullying her and reporting her videos. One of the group members is her bully from an all-girls high school in Louisiana, which they graduated from in 2010.

“Hi y’all, I just found out that the bully from high school is coming at me hard right now,” Stone says in the video that now has over 290,000 views and counting. “She has a full group chat full of girls and their main mission is to come to my page every day, report everything I post, watch videos halfway through, not liking or commenting to fuck with the algorithm.”

Please watch this fully and press copy link or anything to push thru those troll accounts because believe it or not the first 100 people decide how your videos do! Hoping they see this and will just leave me alone! Im embarrassed by this, but it’s true!

Stone reveals how she experienced a decline in both number of views and likes as a result of the Facebook group. In turn, she says this has affected the income she makes through TikTok’s Creator Fund, although she does not explicitly depend on it.

The creator fund is determined by “a combination of factors; including the number of views and the authenticity of those views, the level of engagement on the content, as well as making sure content is in line with our Community Guidelines and Terms of Service.”

Stone told the Daily Dot she was going to put the money she received from the creator fund toward her children’s birthday parties.

“Honestly, you only make enough as a smaller creator depending on views and interactions to maybe pay one bill or use it to put towards something to help with the cost,” she said. “But, it does help when sometimes you just really need that extra gas money, especially with the gas prices right now!”

In the comments, many users expressed their sympathy and rallied behind Stone.

“Mean girls will always be mean girls,” one user commented. “I just let it play, liked it, [commented], shared and followed you. I hope that helps.”

“Karma will come around. So sad to see ladies who can’t grow up and treat other people kindly. I’m sorry you don’t deserve this, no one does,” another user said.

In a second video posted by Stone, she emphasizes the toll that the situation has taken on her. She says the same bully almost pushed her to take her own life in high school.

“Normal trolls don’t bother me!” she said in the caption. “I think I have so many deep rooted issues from (high school) that this brings up a sort of PTSD—(I don’t know) if that’s what you’d call it but it feels that way!”

Little did I know when I recorded this yesterday how appropriate it would be for today! Thank you everyone who is standing by me! Normal trolls don’t bother me! I think I have so many deep rooted issues from HS that this brings up a sort of ptsd idk if that’s what you’d call it but it feels that way! my anxiety is 📈 the things said about me in that chat I mean just so much they put the TT trolls to shame!

The comments are filled with users asking the TikToker to name drop her bully, however Stone feels as though sharing more information would only continue the cycle of hate.

“I don’t want to expose her because I’m scared that if hundreds of thousands of people went for her, like the views the video had got, that she might not react well and be able to handle the hate!” she said.

Stone found out about the Facebook group by a former member who explained the inner workings.

“She didn’t realize what the group was fully about until she was in it and saw. I don’t know if she was sent the invite by mistake or what because she couldn’t believe the shit they were doing. She took screen shots, found me, sent them to me!” Stone says.

After alerting Stone that members of the group were reporting her video calling them out, the friend never messaged her back again, she says.

In her last video addressing the situation, Stone justifies her reason for keeping her breakdown about the bullying on her page.

“I was going to take it down but it’s gotten such a good response and so many people say they can relate that I decided to just let it ride out!” she said in a comment. “I guess more people can relate to the girl being bullied than the girl bullying! I just wish I had y’all in high school!”

“I don’t think people realize how much reporting a video or not watching a video through multiple different troll accounts hurts…because the algorithm will stop pushing it out and sometimes causes the account to be banned even though the creator didn’t do anything wrong,” Stone said.

The Daily Dot spoke with Stone via TikTok direct message.