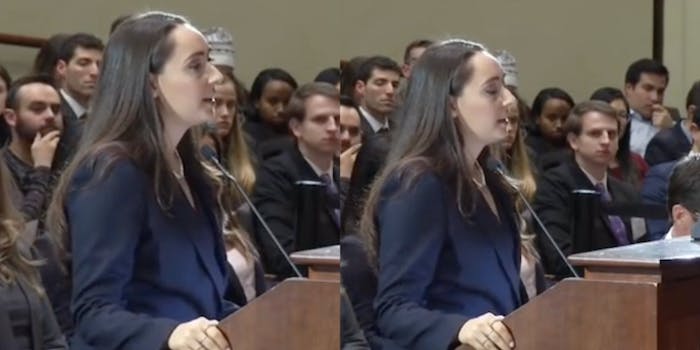 'I don't really think hyping someone fainting and still going is healthy for anyone, Harvard students included.'

A video of a Harvard Law School student fainting as she argues a case has resurfaced on TikTok, where it garnered 2.7 million views and sparked a debate.

The student reportedly fainted at the Ames Moot Court Competition in 2019. The Ames Moot Court Competition is an upper-level court competition for appellate brief writing and advocacy which has been held by Harvard Law School since 1911, wherein students argue cases before a three-judge panel that typically features a member of the Supreme Court as the chief justice. In 2019, the chief justice of the panel was Merrick Garland. Garland was not a member of the Supreme Court at the time but currently serves as the United States Attorney General.

The video triggered a debate in its comments section over whether the student’s fainting and carrying on through the competition should be praised or is cause for concern.

Some commenters wrote in support of the young woman, praising her for pushing through and continuing to argue the case.

“That must of been hard for her,” one wrote. “The feeling before fainting is horrible, and it doesn’t get better when you stand up. She had to push through.”

Others found praising the situation to be “unhealthy.”

“I don’t really think hyping someone fainting and still going is healthy for anyone, Harvard students included,” another top comment reads.

One commenter wrote that they had attended Harvard Law School and that the video was “unsurprising.”

“I went to HLS and this is completely unsurprising,” they wrote. “School and students put immense pressure and no one is fixing the underlying problems. I lost a classmate to MH as did the school this past December. We should NOT be cheering this behavior on——full stop.”