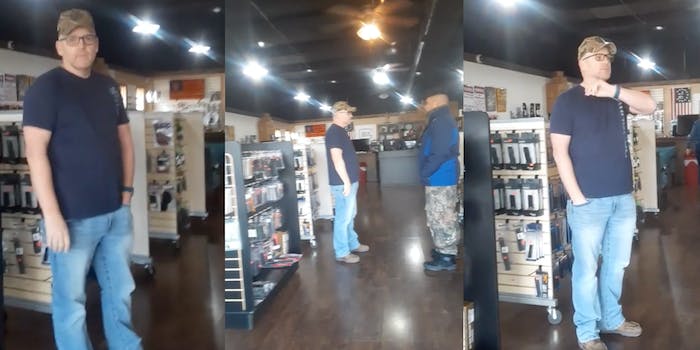 An Arkansas gun store owner kicked two customers out of his shop over one of them wearing a Black Lives Matter mask, which he compared to Nazi imagery.

An Instagram video shared by @davenewworld_ shows the majority of the exchange between the owner of 76 Arms & Ammunition and a Black man wearing a camo neck gaiter. The nearly four-and-a-half-minute video, recorded on March 1, begins with a tame conversation between the shop owner and the customer. The person filming the interaction, who appears to be the Black man’s partner, is wearing a BLM mask.

The gun store owner is in the midst of explaining the shifting meaning of the Nazi symbol as the video begins, noting that “the Nazi symbol, in India, is a good luck symbol.” Indeed, the swastika was known as a symbol of well-being and good fortune and used for millennia by Hindus, Buddhists, and Jains. Since World War II, however, it has been inextricably linked to Hitler and the Nazi Party and recognized as a symbol of hate.

The gun store owner argues that the Black Lives Matter symbol has undergone a similar change, morphing from a symbol of solidarity and progress to one of hate and violence.

“You’re telling me that equality is the same as fascism?” the person filming the interaction asks.

The store owner ignores this comment and digs his heels in, noting that he would also remove a customer sporting a swastika. “You’re not understanding what I’m saying,” he tells the Black man. “Black Lives Matter, the organization, is a fascist, Marxist organization. You need to change your symbolism and create another group.”

When the Black man’s companion speaks up again, saying, “We need to say something other than Black Lives Matter because that offends you,” the gun store owner loses his patience and tells her to leave.

The Black man tries to explain that they are promoting the idea of Black Lives Matter more than boosting the organization. But the gun store owner refuses to continue the discussion and walks away. The Black man and his companion sigh and walk out the door.

Viewers expressed their frustration with the gun store owner’s argument, with many calling it a ploy to cover his “secret” racism. Others urged the duo to take their business elsewhere, preferably to a Black-owned business that would welcome their activism.

“Fuck that guy who cares what he thinks?? You’re expending a lot of energy here, go spend your money else where!!” one Instagram user wrote.

“Hands in his pockets, classic defense mechanism,” another person commented. “Not projecting confidence in what he’s saying. Clearly has been listening to way [too] much right wing news. Talking points with no comprehension of how to back them up.”

76 A&A responded to the incident in a March 1 Facebook post. “Today we asked a young lady to change her mask because we felt it represented a hate group,” the post reads. “She got offended and started to call us racist. Anyone who knows us, knows that we are not. So when you see that the owners of 76 Arms & Ammunition are racist, please take it with a grain of salt. All are welcome, but we do not want hate in our shop.”

The Daily Dot has reached out to 76 A&A.

Update 2:52pm CT, March 6: When reached for comment, the gun store told the Daily Dot, “We did not kick out any customers , we asked a lady to change her mask. We don’t support hate groups. Black or white. We did ask the lady to leave when she started cursing and calling us racist. The customer who was a black male was clearly told that he could stay.”