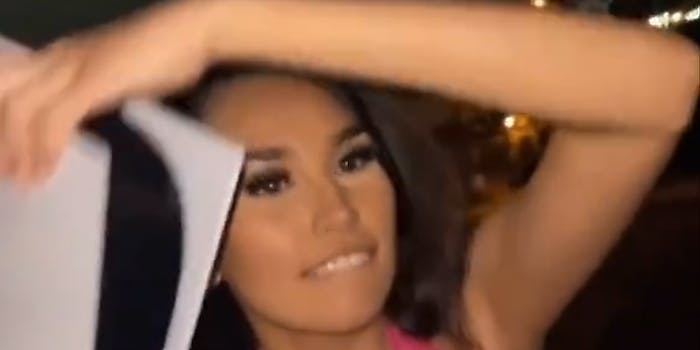 ‘Just be the bigger person,' someone says to her before she chunks it.

In a viral TikTok video, a woman is seen throwing her boyfriend’s PlayStation 5 off a balcony, sparking a debate over gender bias and whether her actions were justified in the comments.

“Just be the bigger person,” someone says off-camera, before the gaming console falls to its demise.

Screaming ensues from the user behind the camera, @texasleanjunkie, who captioned the video: “Her boyfriend was HURT HURT.” It’s an expensive loss, as the PS5 costs about $500 from retailers, but the sold-out gaming console can run up to hundreds more on third-party sites, one of the only ways to get the in-demand console today.

The TikTok garnered over 2 million views and over 16,000 comments. Users in the comments section of the video debated whether her “petty” act was a valid reaction to whatever her boyfriend did, which is unclear.

Some users cheered the woman on.

“It’s okay she probably paid for it,” one user commented.

“I j know he deserved it,” said another.

However, others criticized those who supported the woman’s destruction of the PS5, stating that they would have different opinions if she were a man.

“Y’all saying ‘period sis’ in these comments but if a man was to do it y’all would call him ‘abusive’ and etc.,” one user said.

“Nah there’s way to many girls in these comments that agree with destroying a man’s property and enjoyment,” said another.

“Why do girls think it’s okay to destroy their boyfriends stuff? No matter the reason. Guys honestly don’t think crazy is cute,” a third user commented.

Another shot back. “Maybe we are crazy and don’t care if it’s cute,” they said, prompting even more “period sis’” in response.

Other users were upset with the woman’s destruction of her boyfriend’s property and noted that she recorded evidence of it.

“When she realize she recorded her self destroying someone else property and has to pay for it,” another said.

Finally, some simply criticized her method of pettiness. They suggested that the woman could have sold the gaming console and made a profit instead of destroying it.

The Daily Dot has reached out to user @texasleanjunkie for comment.