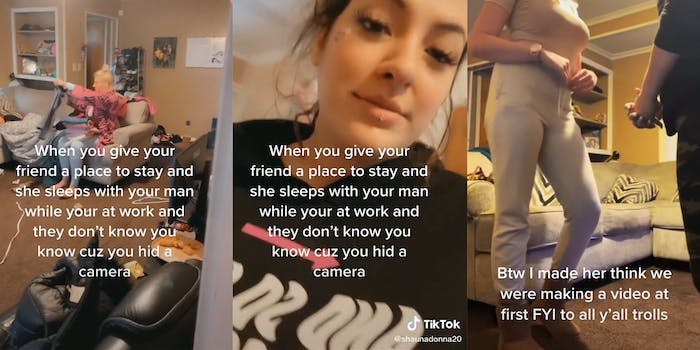 ‘Yes or no did you sleep with my man?’: TikToker says she caught her boyfriend cheating with her friend on hidden camera

'Why would I sleep with your man?'

TikTok has exploded over the ultimate betrayal: One woman’s partner allegedly cheated with her friend while she was at work.

A video of a confrontation between the TikToker, @shaunadonna20 or Shauna, and her friend went viral this weekend with over 7 million views. Shauna uploaded follow-ups that added context to the explosive situation.

In the first video, Shauna captures the unsuspecting friend folding laundry. Over a silent video, the caption claims that Shauna caught her friend, who was staying with her, and her boyfriend having sex on a hidden camera. They allegedly slept together behind Shauna’s back while she was out of the house.

Some people were shocked at the woman’s composure. “Can we talk about how calm she is,” @nicole_nichelle said.

Many commentors encouraged her to guilt the friend into more housework, including @thebriarpatch95 who said, “Let her finish the laundry first though, maybe some dishes too.” @Sol3collective added, “Have her clean the entire house while you’re at it before you confront her.”

Much of the conversation focused on whether you should ever let a friend stay with you and a partner. User @Notthatkaren07 commented, “Never have another woman living in your house with your man.” User @Mrs.alvarez_420 also said, “NEVER bring a 3rd party into your home…no matter how much ‘trust’ you got in them.”

Shauna commented, “I’ll post a part 2 ‘the confrontation’ soon as he walk in the door I’m just patiently waiting because I wanna show them the video.”

Multiple users wanted to stick around for the reveal. User @oaklandlove74 commented, “Someone tag me in part 3,4,5,6,7…”

In the much-anticipated part 2, tension escalated into a physical fight. Shauna tells her friend that she’s recording a normal TikTok video. As the video starts, she turns to her friend and clasps her hands.

“So I got a question for you,” she says. “Did you sleep with my man while I was at work?”

The friend is silent. Shauna asks again, “Yes or no did you sleep with my man while I was at work?”

“Why would I sleep with your man?” the friend says, stuttering.

“You slept with my friend while I was at work?” Shauna yells at her partner as he enters the room. “What is y’all talking about?” he responds.

“Like I don’t got the footage and shit?!” Shauna says as she lurches at her friend. In the force of the altercation, the camera is knocked off its stand and cuts to black. Sounds of the fight rage on in the background.

Users jokingly expressed outrage for a better view of the fight. User @alexkingg17 commented, “Not you knocking us over we ain’t sleep with him she did.” User @crystal_lovee said, “Why you aint prop us up right go do it again lmaooo.”

Many commenters noted that Shauna seemed to fight the friend before her partner. User @teresa_njlr said, “she went for the girl first BECAUSE that betrayal hurt more than the relationship!” User @gordonramseygirl added, “yall don’t understand that betrayal from your best friend hurts WAY more than from betrayal your boyfriend [sic].”

A lot of users praised the algorithm for bringing them back to the fight after seeing the initial post.

“Omg i made it back to this!!!” @jennaaliston wrote.

“YES! I knew Tik TOK WOULD BRING ME BACK TO THIS,” commented @jayde_norman.

In the caption of the second video, Shauna seemed to express some regret for the alleged cheating and ensuing fight’s viral fame.

“I didnt post the video because I didnt want to for personal reasons but here y’all finally fucking go,” she wrote.

Shauna did not immediately respond to the Daily Dot’s request for comment.