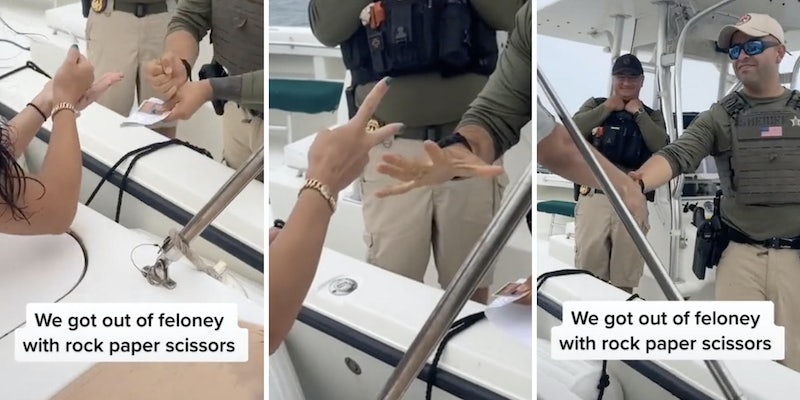 ‘Pretty privilege’: TikToker says they got out of a felony by winning Rock, Paper, Scissor against authorities, sparking debate

'Folks calm down. The cops were probably just having fun with people.'

In a viral video, a TikToker claimed a group of his friends on a boat, some of whom were women in bikinis, got out of a “felony” charge by winning a Rock, Paper, Scissors game with apparent harbor patrol cops. The video sparked debate in its comments section about class and “pretty” privilege.

The video was posted earlier in the month by an unnamed TikToker (@thickbwoy), who has over 43,000 followers for his TikTok videos, which often feature women in bikinis with the hashtags #miami and #florida.

One woman leans over the side of her boat to play Rock, Paper, Scissors with one of the men on the other boat. The man is wearing a vest that has “sheriff” on it. She wins, and people on her boat cheer.

“We got out of [a felony] with rock paper scissors,” the TikToker captioned the video, which has been viewed over 18 million times.

The Daily Dot could not verify if the TikToker who posted the viral video is the one holding the camera in the footage. It is also unclear where the video was filmed; however, other videos posted by the TikToker seem to be filmed in Miami.

Regardless, the viral video sparked debate about the privilege of the people on the boat, who were seemingly able to safely fraternize and joke around with the apparent officers.

“The rich never get felonies tell me something new,” another responded.

Others argued about the legitimacy of the TikToker’s claim that the Rock, Paper, Scissors battle was over a felony charge.

“Bro it wasn’t for an actual felony that is literally illegal for the police officer to do and it’s on film,” one user commented.

“Folks calm down. The cops were probably just having fun with people. Don’t make assumptions,” another responded.

Some asked for clarification about what was happening in the video.

“What was the felony charge?” one user asked.

“Piracy,” the creator of the TikTok responded, most likely insinuating the felony charge claim was only a joke.

This is not the first time officers have been accused of using the game to dismiss charges. In 2015, three police officers in Texas were caught letting a young woman escape charges for underage drinking because she won a game of Rock, Paper, Scissors with them, according to the Guardian.

The Daily Dot reached out to the creator (@thickbwoy) for a response via comment on their viral TikTok.