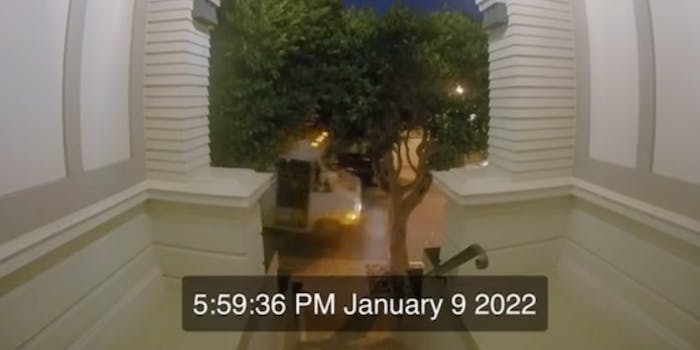 Delivery drivers work extra hard during the winter months, filling orders from Black Friday, Christmas shopping, late Christmas shopping, and returns from unsatisfied recipients. Many people seem to understand that deliveries might run a little differently during this time because of these factors.

But one particular TikTok of a driver apparently trying to make up time on his route has viewers less than thrilled.

Rachel Porter (@racheyyyporter) shared footage from a Nest camera that she claimed her neighbor originally posted to NextDoor. The video has received 1.1 million views on TikTok.

“someone posted on nextdoor complaining about how fedex delivered their package and I—“ she wrote in the video’s text overlay.

The attached video, timestamped January 9, 2022, appears to have been taken from someone’s front door. The camera is set a ways back from the street, at the top of some stairs, and within a narrow entryway.

In the clip, a FedEx truck pulls up to the curb, but doesn’t come to a complete stop. The driver then hurls a package up to the door with frightening precision—and drives away.

Packages may not always be handled with the utmost care when traveling through the mail, but treating one like a frisbee definitely took things to another level.

Another viewer suggested that “he’s definitely behind schedule,” while @woeisryann suggested “he just wanted to make sure it would get there by 6:00.”

While nobody condoned packages being thrown at a front door at full force, people were ultimately impressed at the accuracy.

“How did they do that so accurately and so hard, they gotta canon in there?!” asked @summerrrrlynn.

The Daily Dot has reached out to @racheyyyporter via TikTok comment and FedEx via email.