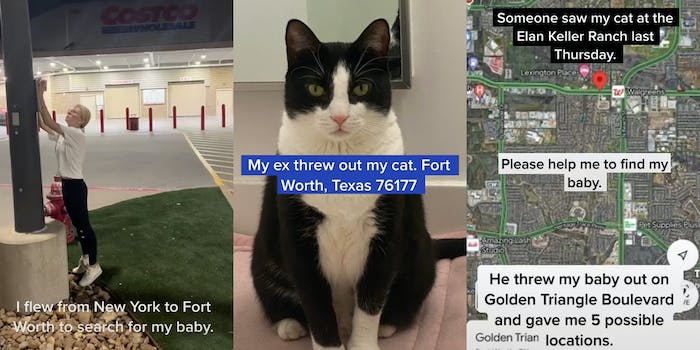 ‘Please help me to find my baby’: Woman’s ex ‘threw away’ her cat. She’s frantically searching for him on TikTok

'Out of the blue he called and said my cat is no longer welcome at his house.'

A TikToker says that her ex-boyfriend threw out her cat in Fort Worth, Texas, and she’s asking TikTokers to help her find the animal.

In a TikTok posted on Sunday that shows photos of her cat Bentley, TikToker @hey_tasia wrote that her ex disposed of her cat in Fort Worth, somewhere in the 76177 ZIP code. She says she flew to Fort Worth from New York to put up flyers and search for her cat.

@hey_tasia shares that her cat was staying at Tehama Ridge, a real estate development in the city, and was thrown out on Golden Triangle Boulevard. She says her ex gave her five locations of where the cat could be and that her cat was seen at Elan Keller Ranch, another development.

“Please help me to find my baby,” @hey_tasia wrote in the video’s overlay text. Bentley has been missing since June 15. On Thursday, @hey_tasia’s video had almost 820,000 views.

In follow-up TikToks, @hey_tasia says she was told her cat was seen with an unhoused person and is wearing a green collar. She also explained that her ex kicked her out of his house but told her that he would take care of her cat while she looked for a place to stay.

“Out of the blue he called and said my cat is no longer welcome at his house, and he threw him out in the middle of nowhere,” @hey_tasia says in a TikTok.

As of Thursday, Bentley was still missing.

Commenters on @hey_tasia’s most viral video gave her advice on how to handle the situation.

“Get help from the police. He committed a crime. It’s illegal to abandon an animal,” user @jackiebaby__ commented. According to the Society to Prevent Cruelty to Animals of Texas, abandoning an animal counts as animal cruelty and is a felony in the state.

“Maybe post on the Nextdoor app for that area,” @whatshappeningman666 wrote.

“I heard if u put their litter box outside ur house it helps them find their way back home. They can smell the scent from miles away,” @lost_angieee commented.

Others said they would look for—or had been looking for—Bentley or offered other help to the TikToker.

“I work around that area for a pest control company so I’m always driving around I’ll see if I see anything,” @oscat99 wrote.

“We drove around the 7-11 and nearby area this afternoon…will keep looking,” @tld1104 commented.

“I live in Fort Worth. If someone finds him, I will be happy to foster until you can get here. Or help you transport him to you,” @msmperry wrote.

The Daily Dot reached out to @hey_tasia via Instagram direct message.