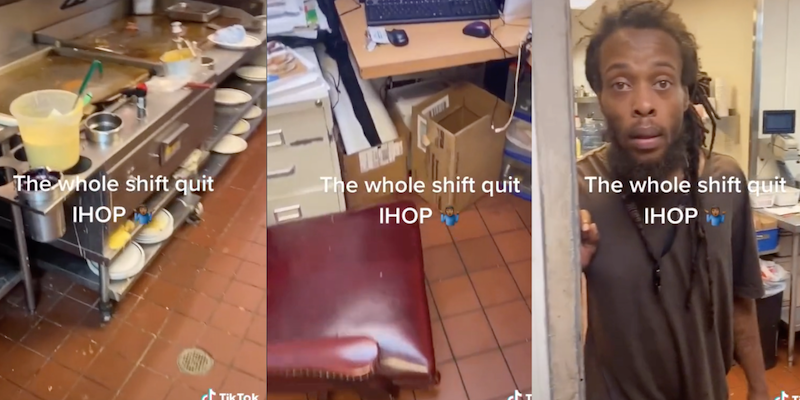 ‘Thank you for calling IHOP, how you doing?’ Customer answers phone at IHOP after all the workers quit mid-shift (updated)

'I don’t know where nobody at. I’m fixing to start grabbing bacon.'

Workers at an IHOP in Chattanooga, Tennessee, apparently walked out in the middle of a shift, and a TikToker filmed the aftermath in a viral video.

User @Dj20Grand recorded himself exploring the empty IHOP kitchen and eventually running into a possible employee.

The video starts with him recording an empty kitchen with no one at their workstations—no one cooking on the grills, no one washing dishes, and no one in the manager’s office.

The user’s video has accumulated well over 3 million views since being posted on July 29.

He makes his way into the office as he continues to provide commentary throughout the video. As he gets to the office, the phone rings, prompting him to answer it.

“Thank you for calling IHOP, how you doing?” he answers the phone, saying, “Nah, I don’t even work here. … Everybody walked the f*ck out.” He then says, “I’m dead the fuck serious, I don’t know where nobody at. I’m fixing to start grabbing bacon.”

He continues to talk on the phone with an unknown person as another man appears to enter the kitchen. The man claims the TikToker is in his office, though it’s unclear if this man worked at IHOP.

Commenters were left laughing at the ridiculousness of the situation. “That dude DID NOT look like he worked there either,” one person commented with laughing emoji. Others laughed at the way the TikToker answered the phone.

And some speculated that the workers being “underpaid” and “overworked” was the reason for the employee walkout.

Update 12:48pm CT, Aug. 13: When reached for comment, IHOP told the Daily Dot in a statement that “this was an isolated, overnight incident at one of our franchisee’s select 24-hour locations in June 2021.”

“The franchisee has addressed this issue with the local team to ensure this does not occur again and has temporarily adjusted their operating hours accordingly,” the statement continued. “IHOP remains committed to providing an exceptional guest experience, and this location will resume 24-hour service soon.”

The creator of the TikTok could not immediately be reached for comment.