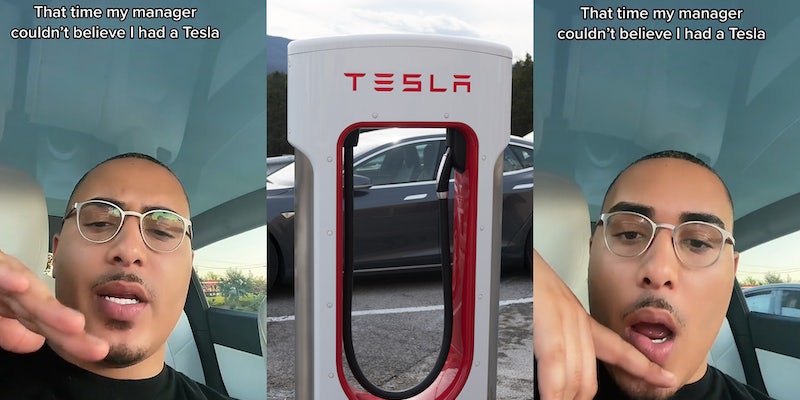 'My manager used to look at me weird for having my nails done lol.'

A viral TikToker says he had a “crazy” experience when his manager couldn’t believe that he owned a Tesla.

The TikToker (@techbyantrell) says in one of his recent videos that he was on an outing with co-workers from his job at the time. He adds that he was running late and told one of the managers that he would have to charge his car. The manager asked what kind of car he had, and he told her it was a Tesla.

Shocked, the manager asked the TikToker how he had a Tesla, he says.

“My thing is if you have to question why I have a Tesla, that means you’re obviously not paying me enough,” the TikToker says in his video. “Why are you asking me that?”

He says his manager then proceeded to ask what his parents do for a living, where he’s from and other personal questions to figure out his finances. The TikToker says the situation was “insane” and adds that he quit the job two months after the incident.

Some viewers commented on the video saying the TikToker’s manager acted unprofessionally.

“That’s really unprofessional of the manager,” one viewer commented.

Another viewer wrote, “The audacity.”

Other viewers shared similar experiences they have had with their own managers questioning their possessions.

“Mine did this for my BMW. They like to pretend to be broke at my job but I’m not,” one user said.

“A director in my last dept questioned how I was able to afford an LV bag. She made such a big deal about it to others,” a second user wrote.

A third commented, “My manager used to look at me weird for having my nails done lol.”

A fourth wrote, “A manager saw me in my Land Rover he was shocked actin the same way then proceeded to tell me he’ll wash it for me.”

The creator clarified in the comments section this his Tesla was a Model Y. According to the Kelly Blue Book, Model Y Teslas start at $64,990 but can exceed $80,000 when fully loaded.