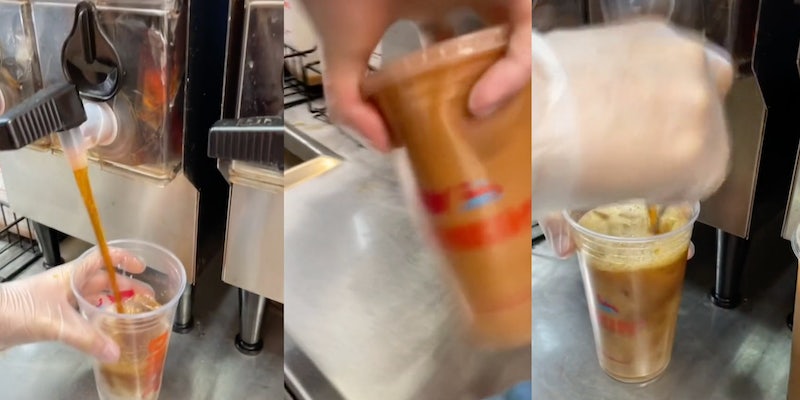 'Didn’t know we was supposed to tip at Dunkin'

A TikToker claiming to be a Dunkin’ employee shared how he makes drinks differently for customers who tip versus those who don’t.

The user, who goes by Jason on TikTok, has more than 13,000 followers on the platform. He uploaded the video on Monday, and it’s garnered more than a million views since. The video is one of the most popular videos on his page, which features Dunkin’-related content.

“Frr if you tip, imma make sure your drink is A1,” he wrote in the caption.

The video shows the worker making what appears to be an iced coffee. He pours in the ingredients, like cream, sweetener, ice, and caffeine, into the cup, one-by-one. He then puts the lid on the cup before swirling and shaking around the contents in the cup.

Then, he shows his process for making drinks for those who do tip. It’s a very similar process, but at the end, when the caffeine is being poured in, he constantly stirs the drink.

A caption appears on the video: “Making sure no sugar is left behind.”

“Mind you it’s jus (sic) me and another worker,” he wrote in the comments. “I definitely put a lil more effort in those who tip but regardless u still getting what u paid for.”

Most of the comments on the video are critical of the worker.

“So im tipping for you to stir my drink?” wrote one user.

“Or u can do ur job regardless, if u was @my store your hours would be CUT,” wrote another.

Many said they didn’t even know that a tip is expected at Dunkin’.

“Dog… it’s your job.. plus when did Dunkin’ accept tips?” one said.

“Didn’t know we was supposed to tip at Dunkin,” another wrote.

It also opened up a debate about when the tip is expected.

“Who tips someone before the service tho,” one person asked.

“Who tips BEFORE a service????” another questioned.

This is just one of the many similar debates in which wage earners and gig workers share their frustrations about not getting tips for their efforts, while many customers argue that tipping should be optional and entirely based on service. In a similar, recent incident, an alleged DoorDash driver alleged he left a customer a long note for not tipping him. While he later confessed he made up the scenario, it stirred a debate about the culture and ethical dilemma of not tipping.

It’s not clear where the employee is located. The Daily Dot has reached out to Dunkin’.