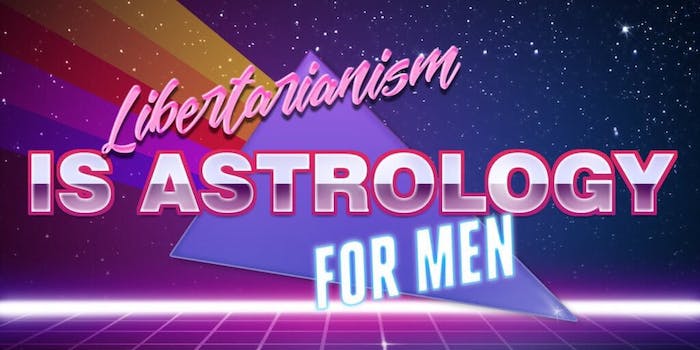 What’s the dude equivalent to being really into ‘astrology’?

It's a fierce debate.

On Sunday, Twitter account @TheSocietyDude tweeted a simple question. “What’s the dude equivalent of being into astrology,” he asked the internet, sparking an enthusiastic response from users. The wave of sarcastic, snarky, and sometimes honest replies quickly caused the tweet to go viral and created an instant meme.

What's the dude equivalent of being into astrology

The response was immediate and overwhelming. Mountains of potential answers, from “bitcoin” to “fantasy football” and “Myers Briggs,” started flooding in.

I think this is the real answer

Audiophilia, in particular the kind where you buy extremely expensive cables.

“Libertarianism” was a popular response. The idea seemed to come as a reference to a 2012 tweet. Back when Barack Obama was still in office, Twitter account @dankgdl tweeted out “libertarianism is astrology for men.”

Several people responded with “economics,” another reference to an old viral tweet. The original tweet, posted by Erin Ryan just under two years ago, read “economics is astrology for dudes.”

Economics is astrology for dudes https://t.co/cxiAg5xj5d

A few of the responses sparked discussion. While there are plenty of “dude” equivalents to astrology, IPAs and anime are apparently not among them. These options, as explained by several Twitter users, are more akin to “the pumpkin spice lattes of men,” and “the dude equivalent of having a personality.”

I'd say IPA's are more like the pumpkin spice lattes of men.

Thats the genderswap for horse girls.

Days into the thread, there isn’t any overwhelming consensus on the “dude” equivalent of astrology, but the discussion sure is fun to follow.