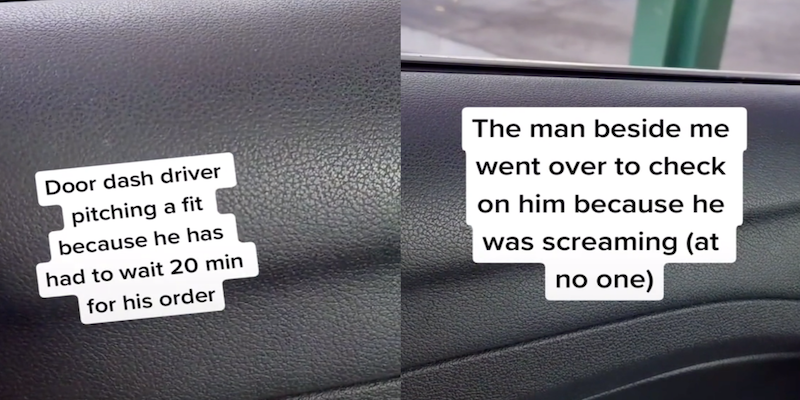 'Y’all ever have a bad day and then one small thing just makes you lose it?'

A TikTok video of an alleged DoorDash driver yelling while waiting in a Sonic drive-thru due to a 20-minute wait time sparked a debate over how drivers are treated.

The driver in the video can be heard yelling, “You are so selfish! Do you know the amount of damage you’re causing small businesses?”

TikToker @thatashleygirlk who recorded the video, captioned it, “Won’t be ordered from DoorDash anytime soon.”

DoorDash drivers earn a base pay of $2 to $10 dollars that is calculated based on the estimated time, distance and desirability of an order. Drivers earn 100% of customer tips on top of base pay and promotions, but drivers striked in July to demand a higher base pay. They also wanted to know the amount of tips they would receive before accepting an order.

A TikTok posted in July by DoorDash driver Denise Small, @voicelikemine on TikTok, received more than 560,000 views. She asked people to stop ordering from DoorDash due to the lowered base pay.

“DoorDash does not care about us,” Small said. “I’m so pissed right now … They don’t keep up the maintenance on our cars. They don’t do anything and then to lower the base pay? Do not give them your money.” DoorDash drivers are expected to cover their own gas, insurance, and maintenance costs on their car and aren’t reimbursed for parking fees, tolls, or tickets.

According to several videos posted by Ashley, the driver was screaming at no one. A man beside her later went to check on the driver.

“I’m not paid by paycheck,” the driver says in the video. “I’m paid by commission … Unethical corporate scum are just so selfish.”

The driver continues to yell, “Help me. God, please,” as they bang their head against their steering wheel, according to Ashley in the comments.

People online were divided between understanding the driver’s frustration and saying it didn’t justify how the driver was treating customer service workers. Some people online thought the driver was overreacting and said they were “throwing a tantrum.”

“Just cancel the order and get another lmao,” one user commented.

Other viewers said people should empathize with the driver considering DoorDash’s low pay and added that waiting a long time for an order when you rely on that income can create a lot of stress.

“That’s his time and money being thrown away,” one user commented.

One user said they could relate to the frustration they heard in the voice of the driver.

“Y’all ever have a bad day and then one small thing just makes you lose it?” one user commented. “I feel like that is what this was.”

DoorDash has stated it removes low customer ratings its Dashers receive due to circumstances outside of the driver’s control. This includes long wait times—over 10 minutes—at restaurants.

In a statement to the Daily Dot, a spokeswoman for DoorDash said, “All members of the DoorDash community are expected to treat one another with respect, and the behavior in this video is very concerning. We are actively investigating this and will take all appropriate action.”