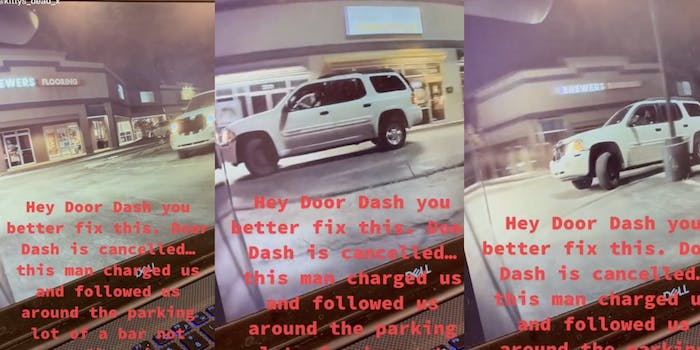 ‘This man charged us and followed us’: DoorDash driver chases TikToker around parking lot with his car (updated)

Dashers in the comments were frustrated that drivers like this gave others a bad reputation.

A driver allegedly affiliated with DoorDash is gaining viral attention on TikTok, where the people he is accused of chasing have shared video footage of the incident. The video has garnered 181,600 likes since it was posted on Nov. 11.

The video footage posted shows a man driving a large SUV through a parking lot, following the people filming. As the video plays, someone in the background can be heard saying that local police had arrested him, although it is unclear what he was charged with.

“Hey DoorDash fix this,” a text overlay on the video reads. “DoorDash is canceled…this man charged us and followed us around the parking lot of a bar not once, but five times.”

The person who shared the video, @kittys_dead_x, wrote that the DoorDash driver wouldn’t change the address of an order she and a friend had placed, and when they went to meet him he insulted and harassed them. In other comments, she states that he has both of their addresses.

“He wouldn’t change the address of the order so we met him and immediately he insulted my friend and she called him a bitch and then he did this,” the poster wrote.

While the poster is asking for the man’s employer, DoorDash, to fire him, some commenters have speculated that the company would actually be able to do very little for her.

In another comment, the TikToker said that DoorDash handled the situation and let the driver go. She also said the company said it would cooperate if she needed a representative to speak with the police.

Some commenters who identified themselves as DoorDash drivers wrote that the driver in the video was an anomaly—not every driver is like this.

“I am a DoorDash driver and people like him give us all a bad name,” one commenter wrote. “We are not all like that. I have been doing this for almost three years.”

The Daily Dot has reached out to @Kittys_dead_x via TikTok DM.

Update 2:14 pm CT Nov. 21: In a statement to the Daily Dot, DoorDash said, “This behavior is absolutely unacceptable and has no place in our community. The Dasher has been deactivated from our platform and we are in contact with the customer to offer our support. We stand ready to assist law enforcement in any way we can.”