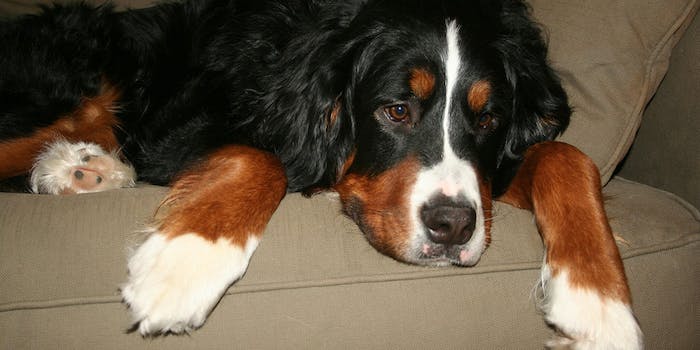 Training a girlfriend is just like training a puppy, according to this pick-up artist

There is no shortage of dating advice in this world. But some of this advice comes from unlikely sources—dog training principles, for instance.

British pick-up artist Tom Torero educates men on the topic of “daygaming” —that is, picking up women during the daytime —through live coaching events and video tutorials. In a video posted yesterday on YouTube called  “Why Girls Are Like Puppies,” the seduction coach argues that established dog-training tips can be easily applied to dating.  He is “not saying ‘Women are bitches,’” Torero explained in the video, but rather that, similar to puppies, “humans—and in particular women and girls—like structure. They like order. They like rewards. They like rules. They like consequences.”

Among the dog-training/woman-training advice Torero offers in the video are the importance of setting relationship boundaries and offering tough love, offering validation (“rewards”) to one’s girlfriend (“with your attention, not objects,” he clarifies), and that in order to be good at seduction, “you have to love what you’re doing. You have to love the puppy. You have to love the girl.”

Torero also offers a word of caution to the viewer. Similar to puppies that bite too much or that never obey commands, some women, he warns, also cannot be “trained.” He refers to such women as the “classic stripper cliché”—they come from “dodgy backgrounds” and have had “dodgy boyfriends” or “dodgy fathers,” leaving them as “damaged goods.” Best to move on and find a new girlfriend, he advises.

Torero is the author of How To Flirt With Girls: Over 200 Tried-and-Tested Hacks to Tease, Charm & Seduce Any Girl, and he has a substantial YouTube following. His channel boasts over 7,000 subscribers and has garnered over a million views since its launch three years ago. His most popular video, about “daygaming” in Russia, has been viewed over 264,000 times.

Torero is not the first pick-up artist to incorporate dog training techniques in his teachings. Mystery, former host of VH1’s The Pickup Artist, references dog training in his book The Mystery Method: How to Get Beautiful Women Into Bed. Mystery argues that, similar to dogs, women must be disciplined for poor behavior and rewarded for good or improved behavior. “[W]hen we correct a woman’s misbehavior,” he writes, “we must then immediately structure an opportunity for her to jump through and easy hoop, thereby rewarding her for it. A ‘reward’ statement might be, ‘Respect!’ or, ‘Damn, that’s witty; I give you that,’ or ‘OK, you win,’ or, ‘That was A-crowd!'”

Men aren’t the only ones adapting dog training techniques in their personal dating game. “My video was a playfully ironic response to the article ‘Down, boy! Treat Your Partner Like A Puppy’ by Deni Kirkova,” Torero said to the Daily Dot in an email, referencing a Daily Mail article from last year that highlighted the work of Sloan Sheridan-Williams, a life coach who argues that humans can apply the principles of “puppy psychology” to a variety of interpersonal relationships.