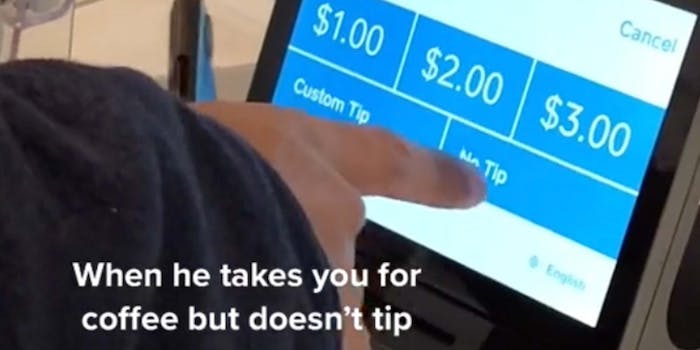 ‘Y’all gotta tip if you can afford it’: TikToker films date hitting ‘no tip’ on coffee order, dividing viewers

The TikToker suggested that non-tippers were red flags.

In a TikTok posted on Nov. 14, @arjunloll shows someone selecting the “no tip” option when checking out on a Square register.

“When he takes you for coffee but doesn’t tip,” he wrote in the video’s overlay text. @arjunloll captioned the video with the red flag emoji. The TikTok has been viewed over 3 million times.

Some commenters were surprised that people tip when they get coffee.

Even baristas weighed in: “As a coffee barista, there’s no need to tip,” wrote @stfujoseph.

“Being a barista i feel we deserve tips,” wrote @mirandarrados.

Others criticized tipping as a custom.

“Why [are] Americans so obsessed with tipping,” wrote @zahraasena.

“The tipping culture in the US is ridiculous. Pay your workers to do their job,” commented @leoloverrr. “It shouldn’t be on us to pay for our meals and their employees.”

Still, some viewers were with @arjunloll, saying customers should always tip service workers.

“Nah y’all gotta tip if you can afford it,” said @nancytoledo94.

The Daily Dot has reached out to @arjunloll and Square.