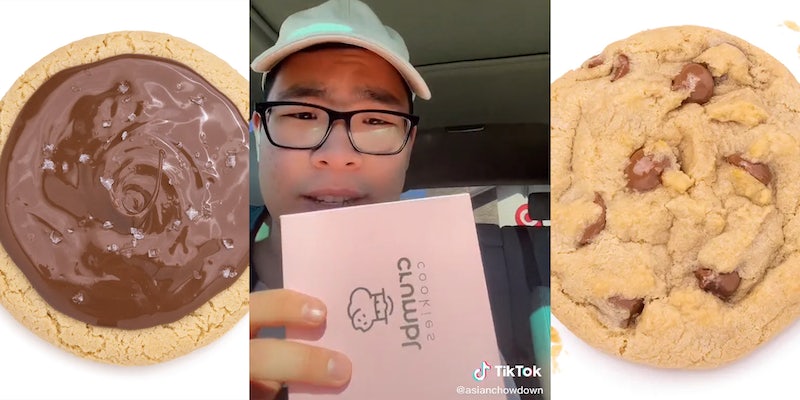 'You make enough as a company to pay your employees better instead of adding on auto tips for customers.'

A TikTok food influencer has gone viral after claiming Crumbl Cookies automatically added a $2 tip to his order.

In the video, Lawrence Kim (@asianchowdown) claimed he got a notification that he spent $8 for a single cookie. When he checked his Apple Pay history, he said the order had automatically added the $2 tip.

“What the hell did you guys even do to deserve this?” he asks in the TikTok.

Kim posted the video three days ago and it has since garnered more than 304,000 views.

Some comments said it was the customer’s fault for not properly checking his order when paying. Crumbl Cookie’s TikTok account even commented on the user’s video, explaining that tips are opted in initially, which “are common for food & bev.” However, the account also noted that each location is owned and operated by different people, resulting in policy differences.

Viewers replied to the company’s comment and claimed that is it not common at all and just looks like a scam. Many brought up Crumbl Cookie’s employee wages and urged the company to better compensate their workers.

“No that’s just not right I know for a fact you make enough as a company to pay your employees better instead of adding on auto tips for customers,” one wrote.

In a top comment, another viewer claimed the cookie company pays their workers less than minimum wage and tip out to minimum wage. “Then the owners keep the rest of the tips,” they added.

“I used to make $4 an hour plus tips when I worked there, it rarely reached minimum wage when my paycheck came in. But it’s different in each state,” a viewer alleged.

Others debated on the need for tipping at establishments that don’t require waitstaff.

“As a waitress, I feel like only waitresses or people who do personal services should get tipped,” a top comment read. “Like a car cleaner or hair/nail artist, etc.”

“Tipping is becoming insane,” another comment with almost 6,000 likes read.

A handful of comments were critical of the cookie company as a whole and many agreed the cookies were “overrated.”

Crumbl Cookies considers itself the “nation’s fastest-growing cookie company” and has been covered by multiple media outlets due to its large TikTok following. Made famous by its weekly rotating menu and famous pink box, the cookie company has a loyal cult following online. But when it comes to their actual cookies, even Kim rated it a 2/10 in a previous video.

“For six dollars the Lord himself better come down from heaven bless that fucking cookie,” another viewer said.

Update 3:37 pm CT March 6: Kim told the Daily Dot he didn’t expect his video to go viral and even believed he was going to get hate for “not tipping.” However, he insists “there is a difference between tipping out of kindness and being ‘automatically or required’ to tip.”

“I live in LA my whole life, it is ONLY common in restaurants where you have a table of usually about 6-8+” he said in reference to automatic tipping. “Not common for a self-service register cookie shop.”

Kim also said Crumbl offered him a free cookie and told him it wants to compensate its employees more using the tipping method.

While he appears skeptical of tipping at self-service places, he believes that waiters and other more personal service jobs like hair dressers, barbers, and hotel staff should be tipped.

update 3:44pm CT March 7: A Crumbl representative told the Daily Dot that a customer is shown a “summary page” that itemizes their order.

The representative said this practice is consistent throughout the food and beverage industry, particularly with delivery apps.