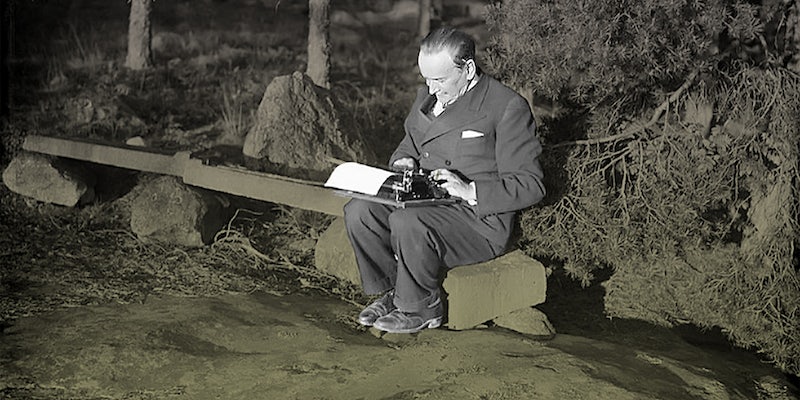 Inside the black market for college homework

In less than a week, I had a fully completed, five-page paper. And it only set me back $130.

Do you have yet another term paper due? You could spend hours in the library, researching related academic articles, pouring over the text, and looking for an insightful thesis to pursue. You could cram on the weekend, double-down on a second draft, hit up TA’s office hours, and revise accordingly.

Or you could hire an unemployed professor to do the work for you. I did—and I got an A-.

Unemployed Professors connects privileged, unmotivated college students with professors across a variety of fields. Since 2011, it’s operated a black market for homework. Of course, the practice has always existed, but the Internet has made it all the easier to operate, and with teachers increasingly desperate for a paycheck, it’s starting to become a viable form of income for educators.

“Even during the dog days of summer, the number of requests is quite high,” T.G., the first anonymous professor hired by the site, told me. He estimates that he’s completed 700 of the site’s 13,000 commissioned projects to date.

Here’s how it works: Students sign up for a free account and post the criteria of their paper, including page length and due date, as a “project.” Once posted, professors specializing in the field of study will place bids on it. (The site boasts a Yelp-like review system for professors, with ratings and reviews.) When an ideal bid is placed, the student will transfer the money from his or her account to the professor’s. It’s that simple.

I contacted Dwight Dewerth-Pallmeyer, the director of the communications studies department at Widener University in suburban Philadelphia, to test the quality of Unemployed Professors. He assigned me an actual term paper from his “Mass Media and Society” course that asked students to apply one of several media theories to an actual piece of media.

Three days after posting the assignment to the site, I had seven different offers from professors, all of them willing to my dirty work for me. I ultimately went with professor “Deleuzienne,” whose expertise apparently includes a Ph.D. in film and media studies. He’s completed 594 papers to date, boasts a perfect user rating, and uses a photo of French philospher Gilles Deleuze as his avatar. His most recent review is telling: “my go-to Professor…gave him the paper in the middle of the week and needed it back by sunday…got it back next day…this guy is dedicated to his craft…thank you so much.”

In less than a week, I had a fully completed, five-page paper. It only set me back $130.

These days, there’s a black market for everything you can imagine. You can buy fake YouTube views, Twitter followers, and even job references. There’s an entire hoax economy devoted to manipulating your online appearance.

But the idea of the practice infiltrating academia has raised serious concern from students who are doing everything above board.

“The statement that kind of site makes is that college students are lazy and if you have the money, you can pass without working for it,” Micki Hernandez, a broadcasting major at Temple University in Philadelphia, told the Daily Dot.

“Professors assign papers so that students must actively engage with and learn the subject in the class that they signed up and paid for,” added Harri Plotnick, an international relations major at Tulane University in New Orleans. “If students pay someone else to write their papers, they are actually doing a disservice to themselves because they won’t learn and be prepared for exams.”

T.G., however, is quick to counter that Unemployed Professor isn’t the problem, but rather an unfortunate necessity spurred by an outdated education system.

“I’ve learned more about teaching, in my two-and-a-bit years of ghostwriting than I have from my five-plus years of teaching,” he said. “There really is a dark side to the undergraduate experience, in terms of time pressure as well as in terms of dissonance between instructor expectations and student capabilities, that I simply did not realize as a strong student, or even as a professor.”

He doesn’t see an ethical dilemma, either.

“The chastising which does occur tends to come from an uppity purported moral high ground that just doesn’t exist in academia anymore,” T.G. countered. “Combining the demise of the tenure system with the hyperbole of college athletics, especially in the U.S., we’re left with a broken system that’s premised more on the combination of entertainment and earning a degree as a ‘box to check on a list,’ rather than with one premised on self-actualization and education as a goal in-and-of-itself. If the system wasn’t broken, I’d have a problem with it.”

“I offer a service,” he continued, “in a commoditized academic marketplace, that is in high demand, and which I’m really good at providing.”

It’s hard to argue with results.

Professor Dewerth-Pallmeyer awarded my paper a grade I would have been thrilled to receive as a student. In his notes, he said the paper “does a good job explicating various takes on the writings of McLuhan.” It’s also worth noting that the paper didn’t raise any flags on TurnItln, the plagiarism-detection service used by teachers.

But grades are but just one small facet of the college experience. Your GPA might be the first thing that an employer looks at, but it’s not going to help you in the workplace. You need actionable skills—the kind developed through the rigors of higher education.

As Dewerth-Pallmeyer was keen to note, the site also puts an unnecessary burden on teachers, forcing them to “spend even more time acting as plagiarism police and less time as educators of critical thinking.”

“Certainly, one can get [ahead] by in life by cheating the system. But what does one really get?” Dewerth-Pallmeyer asked.

“We academics try to teach students [that] education really is much more than grades and job preparation. It is about learning to think, to develop an appreciation for the arts and the sciences, religion and philosophy. It is about using critical thinking to solve complex problems. …

“A diploma is really only a testament to work done, not work stolen.”