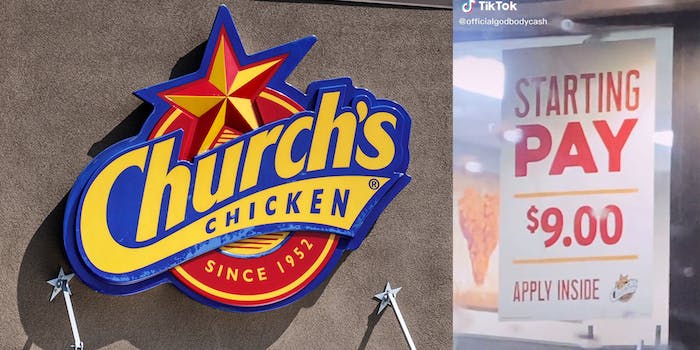 'Wouldn’t even get out of bed for that’

In a viral video posted on Wednesday, TikToker @officialgodbodycash showed the outside of a Church’s Chicken where a sign in the window said the starting pay for new employees is $9 per hour. The video sparked debate on TikTok.

Then, @officialgodbodycash ‘puts it into perspective’ for some may have needed it.

“$9 for an hour of your time,” said the TikToker. “Eight hours of your time at $9/hour to occupy your time.”

A customer service representative told the Daily Dot over the phone that Church’s franchise owners determine the rate of pay for employees based on franchise location.

Commenters had various opinions on the video. Many users said that fast-food jobs are meant for teenagers or younger people who don’t have major responsibilities.

One user stated that, “These jobs weren’t meant to be careers or paying rent.”

Another user added, “Historically these jobs are for students, or just young people living at home. Not a man supporting his family.”

Other users felt that complaining about the pay was ridiculous because they made less than that when they started in the workforce.

Other users felt that the opportunity of making that kind of money was an insult.

One user made a comment saying, “Know your worth.”

Another user said, “Nine dollars, you will be living in a cardboard box.”

The lowest minimum wage in the United States is $7.25/hour and the average cost of living in an apartment in an average area could cost anywhere from $1,270/month to $1,830/month.

In layman’s terms, a person making $9/hour would be making $720/biweekly putting their annual income at around $18,770. This would leave them with anywhere between $1,500 to $1,550 a month for rent and other expenses.

The Daily Dot reached out to the TikToker who shared the video via direct message on TikTok and Instagram.