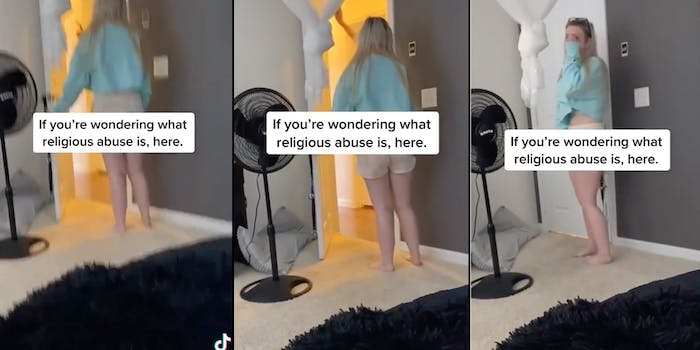 The episode had the TikToker contemplating emancipation.

A viral TikTok video posted to the platform on Wednesday shows what appears to be an “exorcism” that a gay TikToker’s mother is performing at her bedroom door. The TikTok contends that the scene depicted constitutes “religious abuse.”

It comes from @seliabrookes, who declares herself “gay, gay, gay” in her TikTok profile (as well as using she/her pronouns), and features herself with her partner in another of her videos, hashtagged with #gaycouples and #lgbtq.

In this video, which appears to be filmed in her bedroom, a woman (presumably the TikToker’s mother) is seen in her doorway, muttering about “foul spirits” and “lying spirits,” before enunciating, “Satan, I rebuke you!” while pointing at the door frame. While the woman is mostly blocked from view from the TikToker, her animated finger appears at points throughout the video.

The woman then turns and walks down the hall, and the TikToker closes her door, shakes her head, laughs, and puts a hand to her head.

Though she seems wryly amused in the video, which has garnered nearly 250,000 views on its first two days on the platform, it’s clear that she felt it a serious matter.

Throughout the entirety of the video, a text overlay reads, “If you’re wondering what religious abuse is, here.” She also hashtagged the video with #abuse, #religion, and #emancipation, the latter suggesting that she’s contemplating seeking emancipation, a legal process in which a teenager can be considered an adult before age 18 and legally separated from his/her/their parents or legal guardians.

Commenters on TikTok expressed sympathy for her situation, with one expressing, “No hate like Christian love.”

“As a Christian, I’ll never understand how this is okay,” another observed, “This is the complete opposite of what God stands for.”

The video got a signal boost on Twitter, where @tim_tweeted (opting for the punny alias Marjorie Gaylor Queen), labeled the video, “Anti-gay Christian mother exorcises the door molding of her daughter’s room.”

That tweet fostered additional comments in support of the TikToker and in condemnation of the mother.

“I grew up with people like that in my family,” one confessed. “They never get better, only worse. I hope that that young lady is able to get away from her mom into a safe nurturing environment.”

Another tweeted, “Just reminded me of Carrie,” referring to the classic 1976 movie IMDb describes as following “a shy, friendless teenage girl who is sheltered by her domineering, religious mother” who later unleashes her telekinetic powers at her ill-fated senior prom.

“That poor girl! She will leave that house as soon as she is able to,” another predicted, adding a crossed fingers emoji. The commenter then asserted, “Her mother is not only crazy but she sounds like she’s drunk or on something,” before considering, “Or maybe she doesn’t have any teeth.”