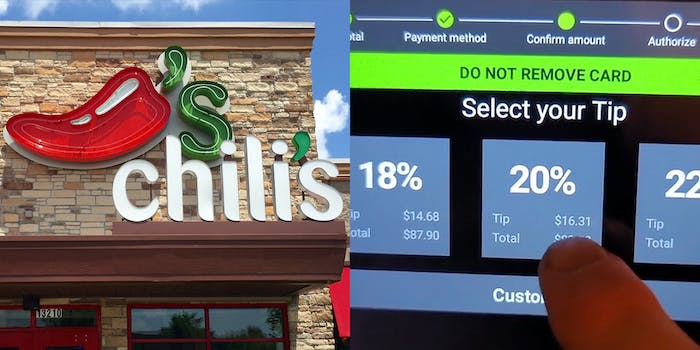 ‘Did they just not think people would check their math?’: Customer shows how tips on Chili’s pay-at-the-table machines are incorrect in viral TikTok, sparking debate (updated)

'Hey Chili’s fix your machines and pay your staff a livable wage.'

Update 10:43am CT Jan. 20: When reached for comment, a Chili’s spokesperson told the Daily Dot in a statement that “The suggested tip is calculated based on the total after taxes and before any adjustments to the check such as comped items, redeemed coupons/rewards, or other discounts. So, the suggested amounts/percentages are inclusive of any comps and discounts our Guests received.”

The spokesperson went on to say Chili’s believes “this is fairly standard restaurant industry practice” and gave an example.

“If a Guest is a My Chili’s Rewards Member and redeems a reward/gets a menu item comped, the suggested gratuity is based on or includes the total check amount before the comp. Fortunately, the tip is adjustable so our Guests can customize or choose the amount they prefer using the ‘Custom Tip’ option,” the statement continued.

Original story: In a viral TikTok video, a customer reveals that the pre-calculated tips on the Chili’s pay-at-the-table touchscreens they are using are seemingly incorrect, sparking a debate in the comments section.

“These numbers are… Like did they just not think that people would check their math?” the customer questions.

With over 450,000 views, the TikTok sparked debate in the comments over Chili’s system and tipping in general.

A few users suggested that the precalculated tip included the total before the reduction of free items from rewards or coupons.

“If you used a reward like a free dessert or chips and salsa they are factoring the cost of that in for the tip even though you didn’t pay for the item,” one user said.

“Did you have rewards, by chance? or a coupon? if anything was taken off your bill, it still counts towards gratuity,” another said.

One user speculated that Chili’s might be taking a cut of the pre-calculated tip. “Ask the server if they got 18% or 20% on your tab, or anyone else’s for that matter. Make sure the restaurant isn’t skimming tips,” they urged.

However, one server chimed in and said the precalculated tip includes the taxes that servers have to pay on their tips.

“I’m a server and that’s with tax which we pay taxes on our tips when we cash out at night,” they said.

Many claimed they only tip on the subtotal, not including the tax in their gratuity.

“I tip…. but never on the tax. why would i tip on the money the government is stealing from me. 20% of the subtotal. never the total,” one user said.

Several others expressed dismay for the necessity for servers to rely financially on tips rather than wages.

“Businesses should pay employees a good wage and no one should be tipping. It’s silly,” one user said.

“Hey @Chili’s Grill & Bar… fix your machines and pay your staff a livable wage so that they are depending on customers to live life,” another said.

Though, some asserted that customers should be tipping well regardless.

“If you want to go out to eat budget in a 20-25% tip. Especially now with Covid. Not all severs are great but most are amazing and work hard,” one user said.

The Daily Dot reached out to Bell via a TikTok comment.