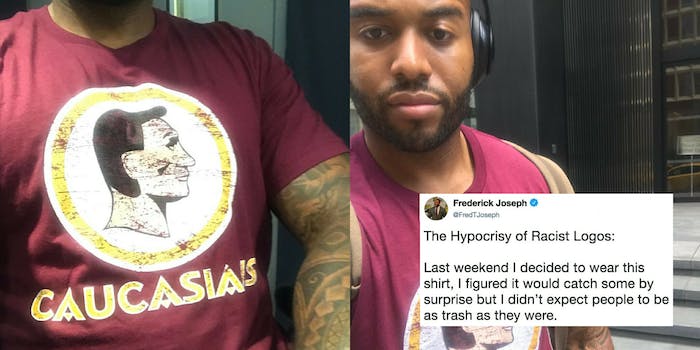 This experiment in empathy failed.

Sometimes, to see a situation from another person’s perspective, we need to put ourselves in their place and “walk” in their shoes. Unfortunately, this strategy to get people to show basic empathy doesn’t always work.

Take this social experiment from Frederick Joseph, founder of inclusive marketing agency We Have Stories, in which he swapped the Redskins football team logo—a stereotypical Native American in headdress, which has long been deemed racist—for a “Caucasian” man. While he did manage to offend a few white people by showing them what it feels like for your race to be made into a mascot, he didn’t exactly get the end result you’d hope for. Not at all.

The Hypocrisy of Racist Logos:

Last weekend I decided to wear this shirt, I figured it would catch some by surprise but I didn’t expect people to be as trash as they were. pic.twitter.com/DW5n6QEmOl

On Twitter, Joseph, who is Black, shared that he had gone out last weekend wearing the shirt, figuring he would catch people by surprise. It featured the term “Caucasians” in the style of the football team font, along with a side-profile illustration of a white man with brown hair, and was supposed to show others how it looks for someone to use such a “racially charged” logo for a brand. He pointed out that unlike the term “redskins,” “Caucasians” isn’t remotely rude toward white people, like the bristling terms “crackers” and “honkies.”

And yet, plenty of white people still got offended at Joseph’s shirt. He said one man called him an asshole after being corrected that it wasn’t a Redskins shirt. Another woman, he said, told him the design was disrespectful but said she wouldn’t say the same thing about the Redskins logo “because that’s the logo!” Another group of white men saw Joseph and his shirt across the street and made like they were going to come at him, he said, while others rolled their eyes, pointed at him, and made snide comments.

Next, an older white lady stopped me in the street and said “why would you wear that? It’s disrespectful!”

So I asked her if she would have said the same if I had on the actually team shirt or another team using disrespectful branding.

She said “no, because that’s the logo!” pic.twitter.com/UaLfIZioS5

Despite all the upset from white people feeling that this kind of representation was offensive, Joseph said that he’s never seen white people react the same way to actual racist Redskins apparel.

“Basically, I was being shamed as a Black person for wearing a non-disrespectful shirt with a white person logo on it,” Joseph wrote. “But people wear apparel and jerseys with logos depicting things such as a Native American and call them ‘redskins’… whew chile, the hypocrisy and privilege.”

I’d be interested to see more people wear shirts and apparel such as this to make the point and see how the people who have racist car decals, shirts, jerseys, etc respond when the tables are turned (and still not really). pic.twitter.com/UyEMCvcD7X

Following Joseph’s thread, several other Black folks and men of color shared photos of themselves wearing similar flip-the-script shirts, writing that they get mixed reactions between being understood and being perceived as “racist.”

The looks I get from ypipo when I wear this pic.twitter.com/wwZ6Yn4z0g

I feel you fam. pic.twitter.com/t98y3AJXqy

I always get a mixed reaction with this shirt as well. Some people are on board, some people miss the point completely. pic.twitter.com/77g0IBsqJw

Hubs has this one. He only gets the evil eye. I don't think anyone has actually said anything to him. pic.twitter.com/oyFRRc2USZ

Bought this one last year, I love it when people ask me about it. There is usually an awkward silence after I let them know that I am Cherokee. pic.twitter.com/CrtlVNnqxA

Ultimately, Joseph said he was surprised by people’s reactions, but that they just showed how “fickle and hypocritical” people can be. Speaking to HuffPost, Joseph said he hopes his experiment inspires others to do the same, though he acknowledged in his Twitter thread that his larger size may give him more protection from public retribution than others.

“I hope to see people in cities like D.C. or Cleveland conduct these experiments as well,” he told the publication.