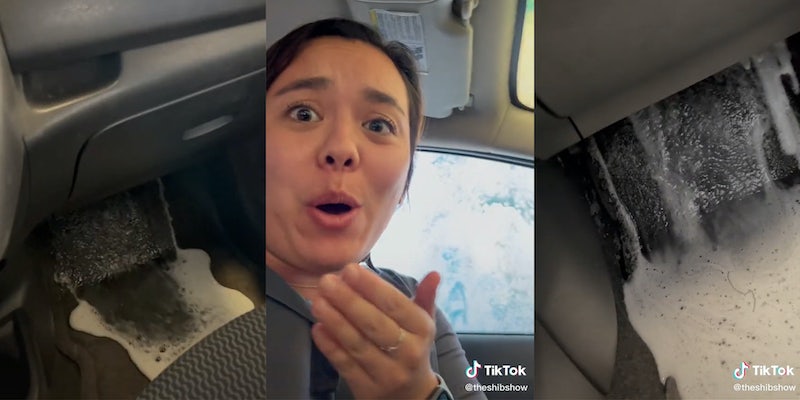 ‘I mean, did you specify outside car wash only?’: TikToker’s car starts flooding while she’s in car wash

A TikToker captured the moment the inside of her car began filling with water as she went through a car wash.

The video was posted on April 20 and has been viewed 13 million times.

She says in a follow-up video that she took the car into a repair shop to have it examined. She shared footage of the tech or mechanic explaining to her what went wrong.

“Your drains were clogged on the exterior under your hood,” the worker tells her. “‘One drain there and another drain there had all leaves debris blocking the drains, causing it to build up, which would then leak into your recirculation——your A/C——right through that opening, causing all the water to go in. We cleared it out, this is the after, we’re still clearing it on this side. You should be good to go (after that).'”

@theshibshow says her car is a 2015 Nissan Versa and that she hadn’t had any problems with it prior to the car wash incident.

“I’ve never had the windshield replaced. I’ve had it since 2018. I’ve never had a problem before with car washes,” she says. “Just a couple things to keep in mind, never open your door in a car wash, never roll down your windows. Yes, I should have honked my horn as soon as it started to happen. Honestly, I was already on my phone because my car was in neutral, just going through the motions, it just happened that I was on TikTok.”

Some commenters said they had the same make and model, prompting concern.

“Not me laughing about this until you say my cars make and model,” one commenter wrote.

“I had one and it was TRASH!” another commenter wrote. “Literally problem after problem and it was brand new!”

“No same and there’s apparently been a recall since 2020 and I never took it in,” a third wrote.

On the TikToker’s first video, however, many cracked jokes. “Did you try putting it in rice?” one asked.

“I mean, did you specify outside car wash only?” another quipped.

The Daily Dot has reached out to @theshibshow via Instagram direct message regarding the video.