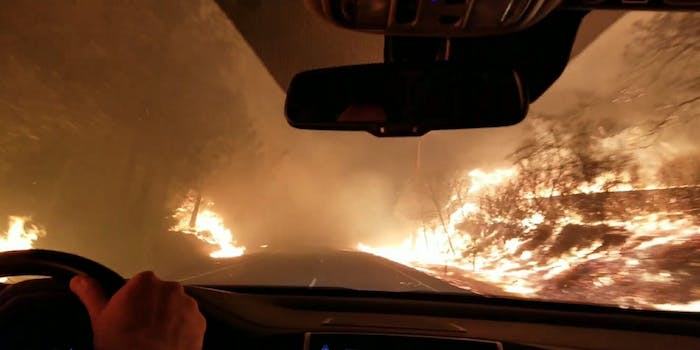 Footage shows a family driving through a road lined with flames, smoke, and sparks.

As three separate wildfires run rampant across California, one evacuating family captured their terrifying journey to safety as fire burned through trees and grass alongside their hometown.

The Northern California Camp Fire wildfire began on Thursday, and it has already claimed 20,000 acres as it grows at a rate of 80 football fields per minute, CNN reports.

Brynn Parrott Chatfield was one of 40,000 residents from Butte County impacted, and her hometown Paradise was one of the towns most extensively damaged by the fire. By Friday, the wildfire essentially “destroyed the town,” as one spokesman from the California Department of Forestry and Fire Protection told the Los Angeles Times.

Like many residents in Paradise, Chatfield and her family were forced to drive to safety in order to escape the oncoming wildfire. By 12:44pm CT, the family was already on the road. Chatfield’s video shows trees and at least one house on fire as flames burn brightly on both sides of the street, the entire sky blanketed in smoke and orange light. In one case, the family’s car drives through sparks scattered below from flames licking the side of the road. The video finishes with the family escaping the fire.

In an interview with the Daily Dot, Chatfield said she was “born and raised” in Paradise and joined residents in evacuating the town that morning. After navigating a traffic backup and picking up a hitchhiker headed to Chico, Chatfield’s family thought they were safe. But as they drew closer to the town limits, they were “stunned and shocked” that things were “burning in huge blazes.”

“We drove down the wrong side of [the] skyway as we heard it has less traffic and [would] save us time,” Chatfield said. “That is where the video is taken. We had no idea that part of Paradise was already on fire.”

I feel very vulnerable posting this but I feel I should. My hometown of Paradise is on fire. My family is evacuated and safe. Not all my friends are safe. It's very surreal. Things always work out, but the unknown is a little scary.*******————EDIT———*********We are overwhelmed by all your heartfelt responses and prayers. There are so many wonderful people in this world. I would love to respond to each of you. We are astonished at the outpouring of love. Paradise has been destroyed. Thousands of us have lost our homes. Many have lost everything, including their lives. But, there are are so many stories of heroism, bravey and service, so much good comes from bad. We had no idea this video would touch so many others. Although my family lost our home and business, we are in need of nothing, just love and prayers. There are so many that have absolutely nothing and need help. Any money made by licensing this video will go to others.For licensing or usage, contact: licensing@viralhog.com

Chatfield’s video quickly went viral on Facebook with over 3,800 reactions and 8,300 shares. Plenty of users empathized immensely with Chatfield’s family, expressing utter terror at their experiences through the wildfire.

Others reached out with one simple gesture: “🙏.”

After Gizmodo reported on the story, Twitter soon picked it up, calling the video “astonishing” and an “amazing display of nature and courage.”

Scary, sad and amazing display of nature and courage….. https://t.co/m0uibBOvDD

Two other wildfires are burning through California. The Woolsey Fire led to mandatory evacuations today, and the Hill Fire—just miles away from Thousand Oaks, where a devastating mass shooting took place earlier this week—is gradually expanding across Ventura County.

Meanwhile, the Camp Fire may force evacuees to flee again as the wildfire approaches Chico, a city with 90,000 residents that housed many initially displaced by the fire.

“There are so many people devastated and their lives are completely changed,” Chatfield told the Daily Dot. “There are big decisions to be made for tens of thousands of people. An entire city has been destroyed.