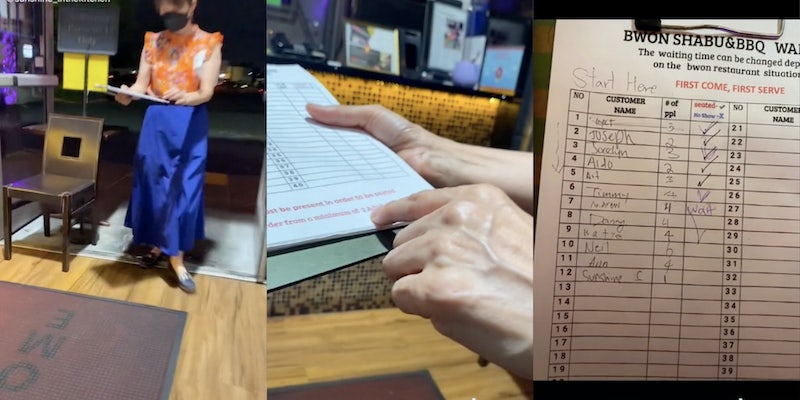 ‘New fear unlocked’: Woman gets kicked out of Korean barbecue restaurant for being alone, sparking debate

'Maybe I’m just hungry and emotional but I definitely cried in my car.'

A video showing a woman being turned away at a Korean barbecue restaurant because she is a party of one has drawn criticism against the restaurant.

In the video posted by Sunshine Chavez (@sunshine_inthekitchen), she is led out of the building by a staff member who explains there is a two-person minimum for dining in, pointing to the policy on their sign-in sheet.

The restaurant, BWON Shabu & BBQ, did not respond to the Daily Dot’s request for comment ahead of publication time.

“When the restaurant doesn’t let you dine in because you’re a party of 1,” Chavez captioned the video, which was viewed nearly 50,000 times. “And you’re told next time bring a friend. Maybe I’m just hungry and emotional but I definitely cried in my car.”

@sunshine_inthekitchen When the restaurant doesn’t let you dine in because you’re a party of 1. And you’re told next time bring a friend ☹️🥺 maybe I’m just hungry and emotional but I definitely cried in my car :( #rude ♬ original sound – Sunshine Chavez

Many criticized the policy that resulted in Chavez being asked to leave and sympathized with her as they, too, like dining alone.

“Were all the tables full?” one commenter questioned. “I can’t understand why they would turn away a paying customer. Would make me not want to return.”

“As someone who loves eating out alone, this is a new fear unlocked lol,” another said.

Others defended the restaurant, given it is an all-you-can-eat style eatery.

“Nobody talking about how the owners don’t turn a profit taking up a hot pot table on one person though,” another commenter wrote. “I’m complaining I can’t get a couple deal for one.”

“Why are people upset at them for?” another questioned wrote. “It’s one of their rules. There’s plenty of KBBQ places in Fullerton and the OC no way y’all are mad.”

The restaurant is also now on the receiving end of a few negative reviews. Some of the latest one-star reviews on Google and Yelp reference the establishment’s two-person policy.

The Daily Dot has reached out to Chavez via Instagram direct message.

Update 4:26pm CT Oct. 7, 2022: Sarah Li, the manager at BWON Koren BBQ, told the Daily Dot they have reached out to the young woman in the video to offer her a free meal if she were to come back with her boyfriend, who she frequently brings with her to eat at the restaurant. She had not accepted the offer at the time Li spoke with the Daily Dot. The two-person policy was instituted over the pandemic, purely for business reasons.

“Prior to COVID, we allowed single diners, but because of COVID, it really hurt the business,” she explained via phone call. “So we were just trying to save the losses where we could. There is a lot of waste when we seat single diners. Sometimes we would have to prioritize a party of one when it could be a larger party, because the last tables available would be the large ones.”

Following the video’s popularity, Li said the restaurant and its owner have been receiving death threats and xenophobic comments.

“My boss is a really good woman. If she knew that it was as big of a deal as it was, because we weren’t that busy, she would have seated her. But there was no communication after she was told our policy. She just said ‘OK’ and left,” she continued. “And she kind of portrayed my boss in a terrible lighting, when in reality she isn’t that type of person at all. She’s someone’s mother. She’s someone’s daughter, you know, she doesn’t deserve death threats.”