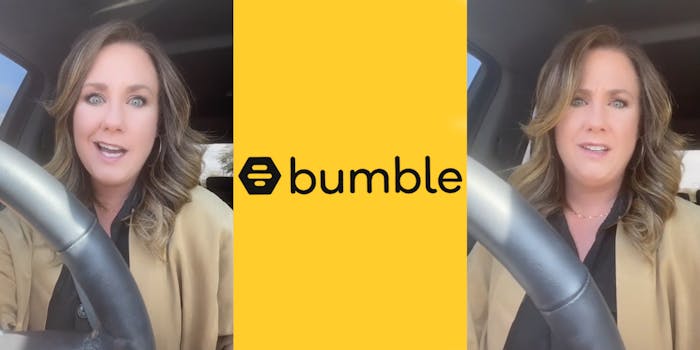 Woman had Facetime date with Bumble match—2 years later, she discovers he was arrested for strangulation and is back on the app

A woman says that two years after a Facetime date with a Bumble match, she found out that he had allegedly been arrested for strangling someone.

Ashleigh Voisin (@ashleighvoisin) posted about her former Bumble match on TikTok in a video posted on Wednesday. In it, she says after seeing the man on Bumble years after their date, she asked a friend if she should contact him again. Voisin said the friend alerted her of the man’s alleged recent arrest for battery by strangulation.

“What the fuck,” Voisin said in her TikTok, which on Thursday had almost 300,000 views. “Welcome to online dating.”

Voisin shared a Bumble profile and alleged mug shot of the man, but the Daily Dot was unable to confirm his identity or arrest record.

Many commenters said that they knew the man and/or had gone on a date with him, and that his name is Mike.

Some commenters shared similar experiences with matches from dating apps.

“Been there, done that. Mile long list of charges,” @meghansaunders commented.

“Was on a date and a girl comes up while he’s in the restroom and shows me his arrest record,” @sarahjhudson wrote.

“Why hasn’t anyone created a dating app where both parties are required to consent to a background check before allowing to chat with one another,” @trinatrainwreck commented.

The Daily Dot reached out to Voisin via Instagram direct message and to Bumble via contact form.

Update 4:49pm CT, June 22: In an Instagram direct message to the Daily Dot, Voisin said that she reported her Bumble match’s profile on the app and that he contacted her via Facebook messenger when he saw her TikTok.

“He sent me a message threatening legal action,” Voisin told the Daily Dot. She says she then blocked him on Facebook. “So many women in the comments have actually matched with him recently and I’m so glad they saw that. I’ll take the risk to keep people safe.”

Voisin also told the Daily Dot that the arrest for battery was not the man’s first arrest.

Update 12:56pm CT, June 16: In an email statement to the Daily Dot, Bumble said the man in question was blocked from the app when Bumble was made aware of the situation.

“We are dedicated to building a community where our members feel safe to make connections and build meaningful relationships,” Bumble told the Daily Dot. “Any profile that violates our terms or guidelines may result in getting blocked from the app for good.”