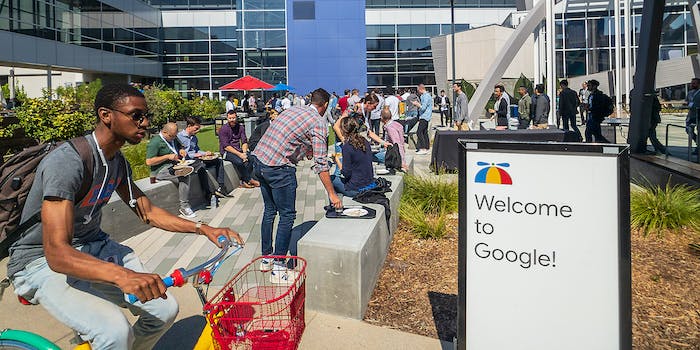 ‘They didn’t believe I was an employee’: Black Google worker says he was stopped while riding his bike around campus (updated)

'Had to get escorted by two security guards to verify my ID badge.'

Update 6:23am CT Sept. 23: A Google spokesperson told the Daily Dot in an updated statement: “We learned that the employee was having issues with his badge due to an administrative error and contacted the reception team for help. After they were unable to resolve the issue, the security team was called to look into and help resolve the issue.”

Update 1:47pm CT Sept. 23: When reached for comment, a spokesperson for Google told the Daily Dot in a statement that the company is “in touch” with Onuoha and is “conducting a thorough investigation.”

“We take this employee’s concerns very seriously,” the statement added. “More broadly, one step we’ve taken recently to decrease badging incidents is to make clear that employees should leave investigating access concerns to our security team, which is trained on unconscious bias and ways to ensure our values of respect and inclusion are central to their interactions with Googlers.”

A viral tweet, posted Monday, has reignited the discussion regarding alleged racism at Google and in the tech industry at large. In the tweet, user @angelonuoha7 describes being stopped while riding his bike on a Google campus because someone reported him for not being an employee.

The tweet author, Angel Onuoha, works in application performance management at Google, according to his bio. He says in the tweet that the report resulted in him being escorted by two security guards to verify his ID badge.

In a follow-up tweet posted on Wednesday, Onuoha said that his badge was taken later that day. “I was told to call security if I had a problem with it,” he wrote.

The original tweet, which has almost 77,000 likes and 12,000 retweets, sparked outrage among Twitter users. Several have tagged Google questioning its practices and asking them to look into the incident.

Some users, who present themselves as employees, said that Google explicitly prohibits reporting people for suspicion that they are not employees to avoid instances of racial bias.

Many also noted that people frequently take Google bikes and ride them without being asked if they are employees, though it is not clear whether Onuoha was riding a Google bike or a personal one.

In addition to coming to Onuoha’s defense, several commenters recounted their own experiences at Google and other companies. One user, who claims to have been a Google security guard, recalled the time he spent an hour looking for a “suspicious individual.” That “suspicious individual,” he says, turned out to be himself.

This is not the first time a Twitter thread has alleged racial bias at Google. In 2019, Leslie Miley detailed his experience with a fellow Googler who allegedly tried to physically prevent him from entering a building, despite Miley’s employee badge being visible.

In the thread, Miley discusses how what happened to him was a direct result of door signs against tailgating that “clearly indicate that if you look different, you should be considered a threat.” In a reply to Onuhoa’s tweet, Miley recognized that Google’s policies have changed but said that “changing people is harder.”

The Daily Dot reached out to Angel Oluoha via Twitter message as well as Google via email. Both parties did not immediately respond to the request for comment.