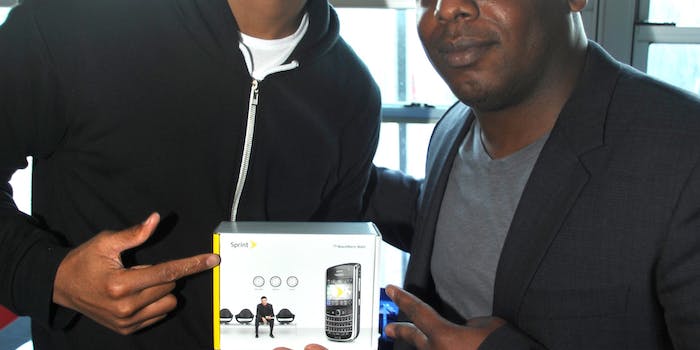 When it comes to trending topics on Twitter, some things really are black and white.

Black Twitter is not a separate website. It’s superficial conjecture put forth by members of the mainstream media who view African American use of the social tool as monolithic.

That was the message behind Dr. Goddess’s 2010 manifesto, ““Why ‘They’ Don’t Understand What Black People Do On Twitter,” the academic writer’s staunch objection to Farhad Manjoo’s Slate article, “How black people use Twitter,”  a distastefully hyperbolic survey of that race’s social-media habits.

“Call ##wordsthatleadtotrouble  a ‘blacktag’,” Manjoo wrote, “a trending topic initiated by a young African-American woman in Hollywood, pushed to a wider audience by a black woman in South Africa, and then pushed over the top by thousands of contributions from users who appear to be black teenagers all over the United States. This story is not at all out of the ordinary on Twitter.”

Nor is this attitude particularly new. The conversation concerning black people’s use of Twitter dates at least back to August 2009.

That’s when Tumblr personality and blogger Nick Douglas shared his friend Micah’s theory that “[t]hese people don’t have real Twitter friends. So they all respond to trending topics.”

A year later, The Awl’s Choire Sicha brought the issue to a wider audience in a piece entitled “What Were Black People Talking About on Twitter Last Night?” Sicha waxed lightheartedly about the entertainment value of monitoring the midnight conversations of black tweeters.
Manjoo cited this post in his 2010 piece, writing, “As a nonwhite person, I must concur: It is awesome.”

Dr. Goddess was not as amused.

“…[I]t’s clear that not only Slate but the rest of mainstream America has no real idea who Black people are, no real clue about our humanity, in general …. For us, Twitter is an electronic medium that allows enough flexibility for uninhibited and unfabricated creativity while exhibiting more of the strengths of social media that allow us to build community.”

Dr. Goddess added, “Actually, we talk to each other AND we broadcast a message to the world, hence the popula­rity of the Trending Topics and Twitter usage, yes?”

Those trending topics are at the heart of any discussion about black Twitter and its conversational undertones.

The topics can be political (#OscarGrant, ​#Ai​yana​Jones), humorous (#BlackParents​Quotes, #hoodmemories, both of which trended last year), or disturbingly controversial. Last October, the name of a 14-year-old girl who may have been the victim of a sex crime trended in various formations for two straight days.

Dr. Goddess maintains, however, that topics such as #browntwitterbird start trending as a result of the sheer number of black people on Twitter.

According to a Pew Research study conducted in June 2011, 25 percent of blacks online are using Twitter. The number drops to nine percent for online whites.

“How do I explain that comedian, Marlon Wayans, who, with his brothers, captured the attention of the next generation with hilarious films such as ‘White Chicks’ and ‘Scary Movie,’ has been a source of some of the sillier hashtags ever since he arrived on Twitter?” Dr. Goddess asked rhetorically. “At present, he has 310,000 followers, quite enough to produce a Trending Topic all by his lonesome, yes?”

Today, the Twitter account held by Wayans has more than 860,000 followers. But the increase in followers only supports Dr. Goddess’s point concerning what inevitably happens when the masses start talking.

“You see, in this list are the loc-wearers, the wig doners, the sports enthusiasts, the hometown reppers, the Afrocentrists, the ghetto fabulous, the afro’ed up, the regal ones and the graduates,” she wrote.

On black Twitter, everybody’s joining in on the same conversation.

It’s a beautiful thing, she believes, an expression of culture and a building of community.

It’s time for the media to get over it.