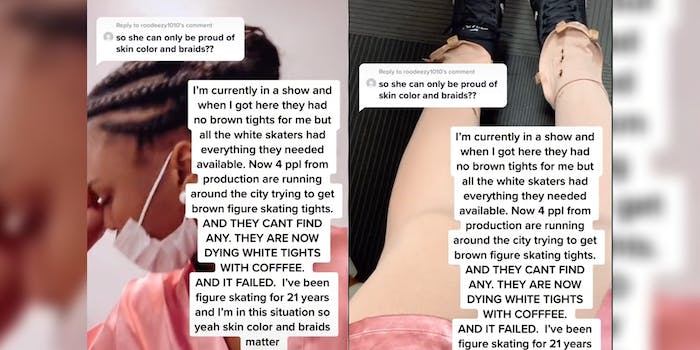 ‘White skaters had everything they needed’: Black figure skater says production didn’t have tights for her skin tone in viral TikTok

'She shouldn't have to bring her own'

In a video posted Saturday, a Black figure skater said that when she showed up to her show, the production company was in a frenzy trying to find her brown tights. They only brought tights that matched white skin tones.

In the TikTok video posted by ice skater Louisa Warwin, the performer looks visibly disappointed as she pans down to her legs. The tights she’s wearing, which were provided by the production company and are the style that go over the skate boots, don’t come anywhere near matching her skin tone.

Warwin said the white skaters were provided with everything they needed, in the right colors. The production team had four people running around the undisclosed city trying to find brown figure skating tights. When they couldn’t find any, the team tried dyeing the white tights with coffee, but failed.

“I’ve been figure skating for 21 years and I’m in this situation, so yeah skin color and braids matter,” wrote Warwin who often wears her hair in a variety of braided styles. The video was in response to a comment questioning the significance of diverse representation in skating.

Warwin’s experience echoes that of so many Black creatives who are forced to provide their own materials (like brown ballet shoes) or do certain things themselves (like their hair) because everything around them is tailored to their white counterparts. Similar experiences have been recounted countless times by Black models who had to bring their own foundation to a photoshoot or do their own hair for a runway because the hired hair and makeup artists didn’t know how to work with Black skin and hair.

Warwin’s TikTok video has more than 135,000 likes. The accompanying caption reads, “It’s not all that matters but in a sport with lack of diversity it’s important fr kids to see people who look like them.”

In a comment Warwin added that she never goes to any competition or skating event without her skin color tights because, “I know the deal since I was small.” Though Warwin brought her own tights, the show she was performing in required over-the-boot tights and hers were the style that go inside the shoe.

Despite the lack of inclusive tights, Warwin said she was grateful the wardrobe team cared enough and took the matter seriously because she refused to be in that situation again. She also stated she doesn’t want anyone else to go through the same experience. “It’s traumatic for me [at this point],” the skater said.

“The point is that the next Black girl that comes here, if it’s now or in 10 years, shouldn’t be in this situation,” Warwin added.

She also said that it’s especially disappointing given that she’s dedicated her entire life to the sport and is a trained professional figure skater. Yet, she’s still made to feel like she doesn’t belong.

People in the comments section were divided. Some said the ice skater should have been prepared and brought her own (which she did, they just weren’t the style the show was using), but the majority came to her defense.

“Some of y’all are missing the fact that she shouldn’t have to bring her own, because it should be provided just like they are for the majority,” @kyla_mylaz wrote.

“I see some ppl saying to bring her own, if white skaters don’t have to then why should she?” @justal.x commented.

“It just shows their privilege that they don’t even have to think about these kinds of things,” @just_ess1e said.

In a bit of a happy news, Warwin said in the comments section that the wardrobe team express-ordered brown tights that would arrive in a few days.