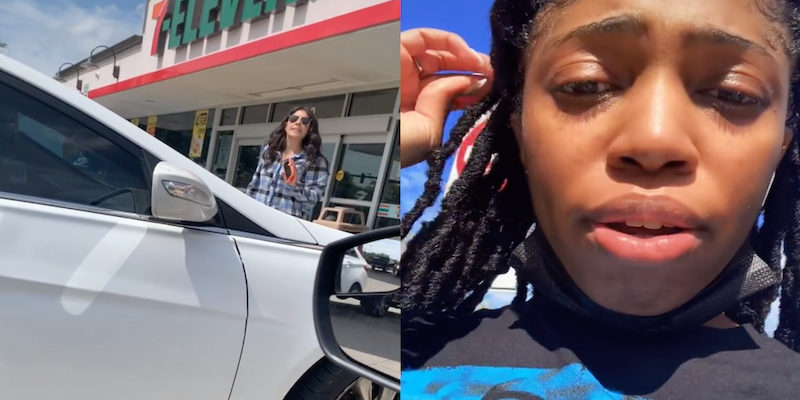 ‘They always say Black like it’s an insult’: TikToker says Karen nearly hit her car then called her ‘Black b*tch’

The TikToker claimed the Karen was texting and driving.

A white woman allegedly texting and driving almost hit a Black TikToker’s car, so she blew the horn to get her attention. The TikToker then began filming after the woman called her a bitch for doing so.

In the video, Shaniece Nicole, @SheShedShaniece on TikTok, opens her car window and asks the white woman what she said. The white woman denies being on her phone and says she didn’t see Nicole.

“Well you should’ve said, ‘Excuse me’ when I blew the horn, bitch,” Nicole says. The two women then both start calling each other ‘bitch’ as Nicole remains in the car.

“Call me a fucking bitch one more time,” the white woman says. “Get your fucking ass out of the fucking car.” Nicole replies, “Pull me out of the car.”

As the white woman walks away and gets in her car, she calls Nicole a “fucking Black ass fucking bitch” and the video ends with Nicole asking the woman to treat her “like a Black bitch.”

While some people online said they didn’t understand why Nicole was cursing at the other woman and said “like you’ve never been on your phone while driving,” most users said that was no justification for resorting to racism and applauded Nicole for how she handled the situation.

“They always say ‘Black’ like it’s an insult,” one user commented. “Yes I am Black, wassup with it??” Another user said the woman could have said a simple apology for almost hitting Nicole, instead of getting defensive.

“She showed her true colors when she said Black bitch,” Nicole replied in the comments. “I was recording so she knew she had fucked up.”

While no law enforcement was involved in the interaction, Nicole made a follow-up TikTok and shed light on the potential trauma she could have put herself and her family in if she had gotten out of the car.

Black drivers are more likely to be targeted by law enforcement due to racial profiling, and being pulled over holds greater potential for arrest or violence. Nicole explains in her video that although she was angry, staying in her car protected her and her family’s well-being.

“My lips move when I talk but these hands do too,” Nicole says. “If a Karen is worth you going to jail for the rest of your life, then by all means, go off sis. I ain’t doing it though.”