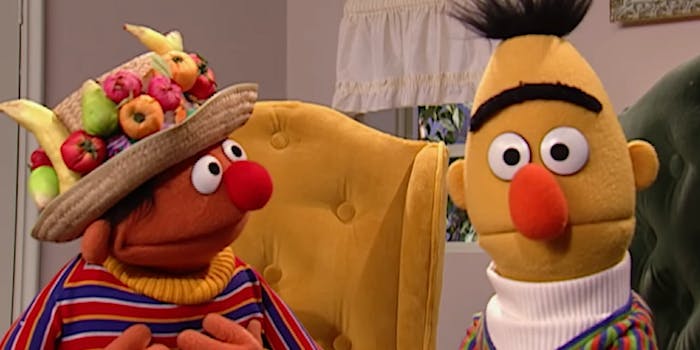 One show writer says the characters were inspired by his own relationship.

People have asked whether Bert and Ernie are a gay couple for as long as they’ve lived at 123 Sesame Street. It’s probably a fair question, since the puppets are presented as two adult male roommates. Even though they sleep in different beds—and they’re always bickering—there’s an undeniably strong bond between them.

Sesame Street writer Mark Saltzman has brought the discussion to the fore once again after he said in an interview that Bert and Ernie were inspired by his own relationship with film editor Arnold Glassman. The revelation—and the pushback from the children’s show—is causing pandemonium on Twitter.

“I always felt that without a huge agenda, when I was writing Bert and Ernie, they were [gay],” Saltzman told LGBTQ blog Queerty. “I didn’t have any other way to contextualize them. The other thing was, more than one person referred to Arnie and I as ‘Bert and Ernie.'”

Saltzman went on to say that he related to Ernie as the “jokester” even though he looks more “Bert-ish.”

Sesame Workshop, the nonprofit that produces the show, issued a statement via Twitter on Tuesday refuting Saltzman’s claims and insisting the puppets “do not have a sexual orientation.”

“As we have always said, Bert and Ernie are best friends,” the statement said. “They were created to teach preschoolers that people can be good friends with those who are very different from themselves.”

The response echoes what the show’s producers have been saying for years, including in 1994 when Sesame Workshop head Gary Knell said that Bert and Ernie “are not gay, they are not straight, they are puppets. They don’t exist below the waist,” according to the Independent.

But some people on Twitter are upset that Sesame Street, for such an open-minded children’s show, isn’t embracing the idea of Bert and Ernie being gay in 2018.

I appreciate that you're fighting off bigots, but this is a mealy-mouthed double-standarded lie. You can't say "they're puppets, they don't have a sexual orientation" when MANY OF YOUR MUPPETS ARE LITERALLY MARRIED. "Straight" is a sexual orientation. https://t.co/SeeZC6WO6q

I am not gay, and I still find it ridiculous that this statement was made. Sexual orientation has nothing to do with the body parts you have. How about teaching kids tolerance and love for all despite differences?

Can't they just be whatever we want them to be??? https://t.co/PzA1EzqvA9

Frank Oz, who originated the voice of Bert in 1969, tweeted on Tuesday that “it’s fine” if Saltzman sees the chracters of gay but that “they’re not, of course.” Twitter users then accused Oz of feeling “disgust” toward homosexuality.

Frank Oz being told he's homophobic because he doesn't think a puppet he created is gay is peak twitter. pic.twitter.com/KzkEHNgfK7

Pushback also came from people who interpreted Bert and Ernie as asexual.

bert and ernie subtweet: can we please stop throwing ace ppl under the bus while defending fictional gay(/lesbian/queer) couples, and also vice versa, I am so tired

The argument looks far from settled. On one hand, people are defending Sesame Street and Frank Oz, who assert that the characters were never meant to be gay—and that sexual orientation is perhaps not an appropriate topic for a show aimed at preschoolers.

On another hand, romantic (not necessarily sexual) love between straight people is depicted on children’s shows all the time. It’s a reflection of lived experiences, just like Saltzman says his writing for Bert and Ernie was inspired by his life. And what could it mean for a child to understand that gay couples exist and can be accepted?

More broadly than the question of whether Bert and Ernie are gay, it’s a question of who has control over the messages in the media we consume. Is it the creators, who thought up the characters and planned to send a message in the first place? Or is it the audience, who will undoubtedly inject their own experiences and interpret situations and characters as they wish?

The answer, of course, probably lies somewhere in the middle.

I DON'T CARE IF BERT AND ERNIE ARE GAY I JUST WANT THEM TO BE HAPPY!!!!