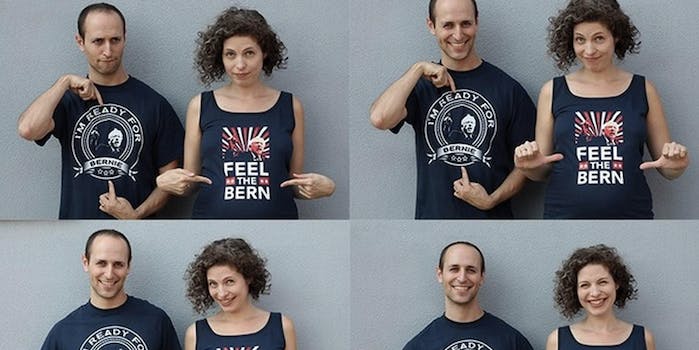 The first-time parents wanted to combine exciting news with an important message.

Sivan Rotholz and Matt Teitelman’s baby is still a fetus, but he’s already a Socialist.

The first-time parents were excited to announce that they were expecting. But rather than employing the usual tactics—a sonogram photo, a picture of a bun in an oven—the Hoboken, New Jersey couple combined the life-changing news with a message of support for their favorite presidential frontrunner, Bernie Sanders. 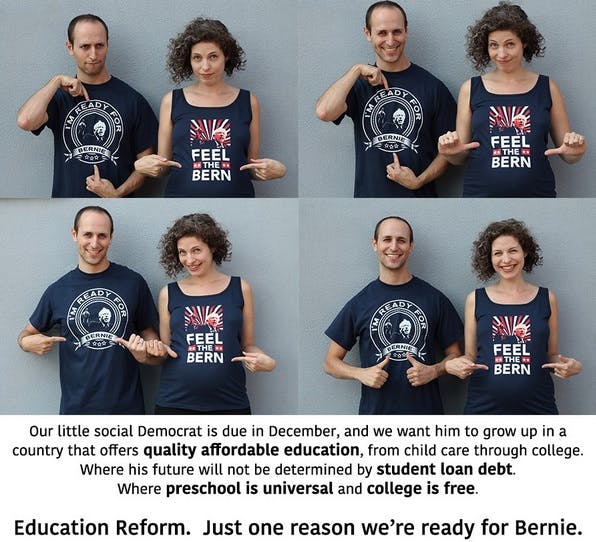 “We’ve been Bernie Sanders supporters for some time,” Sivan, 35, told the Daily Dot in an email. She named Sen. Elizabeth Warren and Sen. Cory Booker as other influences, but for the next president of the United States, it’s Sanders all the way.

“We had many people tell us how awesome and creative the dual political and personal message was, and had a number of Bernie supporters share the announcement,” Sivan said. “We have heard from many friends telling us that they, too, are Bernie supporters, or even that they are now Bernie supporters as a result of our advocacy, which is awesome.”

The cheeky announcement went out via Facebook, Instagram, Twitter, and email (the couple decided to forego the hard copy and save a few trees). But what they’re really trying to save with this announcement is the amount of student debt that Americans will have in the future.

Matt, 29, and Sivan are largely supportive of Sanders because of his ambitious plans for reforming the American education system. And for Sivan, the issue is personal.

“I have over $150,000 in student loan debt. That’s debt that can’t be refinanced or discharged in bankruptcy,”  she explained. “For years now I have had to partially defer my loan payments or pay interest-only or income-based repayments. Still, about 1/4 of my monthly net income goes to student loan payments, and that doesn’t even cover the monthly interest owed.”

The writer and adjunct professor confesses that she and Matt, a musician and music teacher, continue to bear the burden of the student debt she accrued during her undergraduate and graduate education. As they anticipate going from a family of two to a family of three in December, they’re excited but also aware that a Sanders presidency could very well ease theirs and others financial futures.

“Every penny we earn and spend counts,” Sivan said. “So when I have to put 1/4 of my income towards student loan payments, Matt is adversely affected by my student loan debt. And when you compound that reality with the fact that we have a $4,500 health insurance bill coming due when the baby is born and the only way I can take maternity leave or we can take family leave is if we save up for it in advance, the amount of money I am spending on student loan debt every month is significantly impacting not only our day-to-day life, but our future as a family.”

But the real question is: Can you really call an unborn baby a ‘social Democrat’? What if he [gasp!] turns out to be a Republican?

“We like to consider ourselves pretty open-minded,” Sivan said, “but I keep knocking on wood and saying, “Please don’t let him grow up to be a Republican!” Or worse: “a Libertarian!”

But the expectant parents will love their child no matter what candidates he or she supports. “At the end of the day, Socialists care about their fellow human, about making sure people are cared for and everyone’s needs are met,” Sivan explained. “It’s more important that he has good values and good judgment and less important what political party he aligns himself with.”