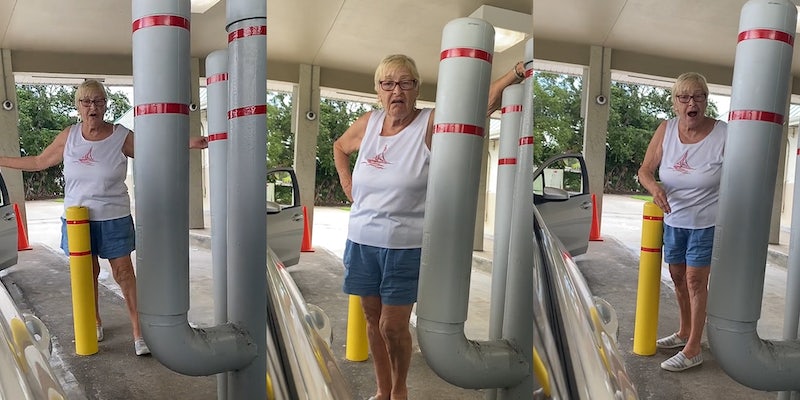 ‘Not her saying it’s probably bc you don’t have money’: Woman films ‘Karen’ at bank drive-thru, sparking debate

'Idk at first it didn’t sound like a Karen. AT FIRST.'

In a viral video, TikToker Ashley (@ashandthenley) filmed and shared an interaction with a so-called “Karen” at a bank drive-thru in Vero Beach, Florida. Viewers, however, are divided on to what degree the Karen behavior, used on people who have public and often racist confrontations that go viral online, is over the line.

The video began as the Karen got out of her car and walked toward Ashley’s car, leaning on a structure by the chute. The Karen asked if there was a problem with the machine, and Ashley responded saying, “It’s not me.”

“Well if there’s a problem with it, go somewhere else,” the Karen said.

“Go somewhere else? It has my card lady. It has all my money in it,” Ashley responded.

The two women increasingly get louder as they debate the issue, and eventually, the Karen walks back to her car after telling Ashley she doesn’t have money in her card.

In the comments sections, most users side with Ashley.

“Not her saying it’s probably bc you don’t have money in there,” one user said.

“It’s the ‘well’ for me,” another commented.

However, a few users left comments saying they believe the older woman was just checking on Ashley and was met with confrontational language by the creator.

“I think you took this the wrong way imo. I think she was frustrated about the machine. She said ‘I’ll go somewhere else in the beginning,’” one user commented.

“Idk at first it didn’t sound like a Karen AT FIRST; it sounded like she was concerned,” another user said.

In an updated comment in the comments section, Ashley provides more clarification on the altercation.

“I started recording after this woman was honking and cursing and screaming at me so I matched her energy,” she said. “She got out of her car and I recorded for my own safety! She didn’t want to listen to reason or any explanation. I was never rude first. NEVER APPROACH AN ATM!! So Dangerous!!!”

The Daily Dot reached out to Ashley via TikTok comment.