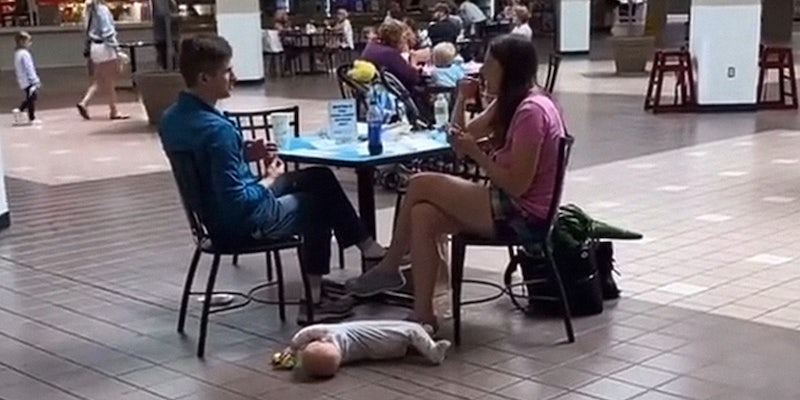 ‘Some people really do not deserve to be parents’: Video of baby flailing on mall food court floor sparks debate

The video shows the baby's apparent guardians sitting at a table, seemingly ignoring the baby that flails around at their feet.

A video of a baby lying on the floor in a mall food court has sparked a heated discussion regarding appropriate parenting.

The footage shows the baby’s apparent guardians seated at the edge of the food court, seemingly ignoring the baby that flails around at their feet. While it’s unclear how old the child is, they appear unable to easily do much of anything besides wave the toy clutched in their fist around while on their back.

“Are they for real, for real?” asks the girl recording as she walks by.

The video appears to have initially been posted to Snapchat, although it has since made the rounds across social media, ultimately winding up on TikTok, where @chrisbouldin had some choice words about everything going on.

“Some people really do not deserve to be parents, bro,” he said, after sharing the video. “It is very apparent. Why do you have your kid on the floor of a food court? … Who knows what’s on that floor?”

Most people agreed with Bouldin’s assessment, with one person noting she wouldn’t even put her purse on that floor.

While not everyone was as concerned about the issue of germs, plenty of other concerns were raised as well, from the possibility that the baby could pick something up off the floor and get hurt to the fact that it looks like the child is close enough to the walkway that someone could step on or drop something on them.

“Yeah the germs but like that’s some hard tile floor!!” wrote @primsmommy. “What if he hits his head or something??”

However, some people chimed in to insist that leaving your baby on the floor of a busy public area is perfectly normal and not something that strangers should be concerning themselves with.

“You shouldn’t talk on something you don’t know. Sometimes this is all that will calm a child down,” said @krystalraye51.

“Building up that immune system!!” another user joked.

But the fact that the pair of adults didn’t seem to have a stroller with them suggested to many that they just weren’t equipped for, at the very least, a day out shopping with their young child.