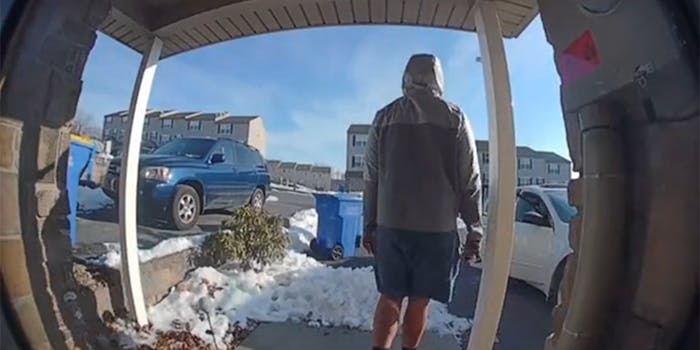 TikToker catches ‘baby daddy’ sneaking woman out of her house, trying to cover up Ring camera

A TikToker says she caught her “baby daddy” sneaking another woman out of her house thanks to her Ring camera.

Dani Rey (@danirey110) shared the short clip of security footage to the social media platform, in which a man comes out of the house and seemingly tries his best to stand directly in front of the camera. However, it still manages to catch a glimpse of someone else coming out of the door behind him before he can properly block the view with this body.

He also seemingly fails to take into account the fact that the car parked in the driveway is still within partial view of the camera—and the camera catches someone getting into the passenger’s side as he locks up the house.

“When ya baby daddy sneak someone in ya house and tries to hide it,” Rey wrote on the video. “Thank god for Ring!”

“Hope it was worth it,” she added in the caption.

The TikToker added a little more context in the comments, noting that she didn’t see the Ring footage in real-time but decided to check it later after finding a condom wrapper.

“Couldn’t have gone to her momma house or a hotel shit or ya car,” she suggested.

Viewers were equally floored at the audacity of the man.

“The nerve,” one simply commented.

“My locks would be changed,” @jazmine_jenay wrote.

Rey seems to be taking the whole thing in stride at the moment and said she plans to put up a storytime to divulge more information. In the meantime, she’s encouraging everyone to “go order that ring camera!!”

“And thank me later @ring,” she added.

The Daily Dot has reached out to Rey via TikTok comment.