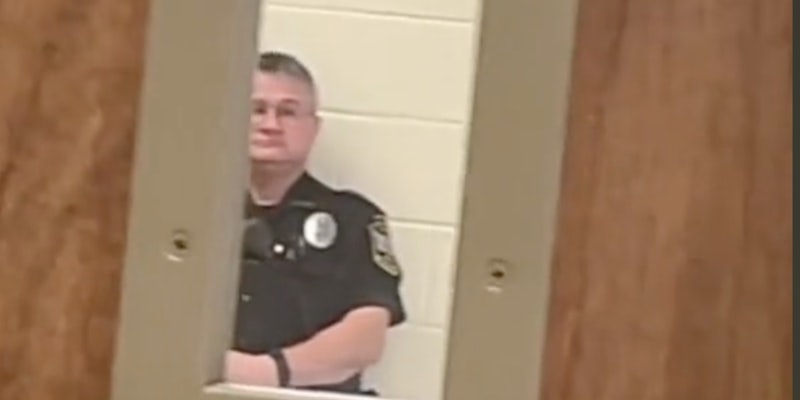 'We’re facing repercussions right now all because I stood up for what I believe in.'

Two Black high school students in Knoxville, Tennessee have allegedly been suspended after standing up against transphobic bullies at school.

One of the students, known as @willum4606 on TikTok, documented his experience on the platform.

Willum doesn’t explicitly say who called the police, but commenters alleged the caller was assistant principal Beth Haun. Willum appeared to confirm this by “pinning,” or keeping visible at the top of a thread, a comment that had Haun’s work contact information. According to Willum, after he stuck up for a fellow classmate, who was trans, Haun called the police. It’s unclear why the assistant principal thought a police presence was necessary or appropriate.

Willum said Haun called the police because he asked her a series of questions such as, “Why am I getting suspended?”, “Why is this happening?”, and “Why are we facing repercussions?”

The trans student, who was getting deadnamed and bullied, was also moved from the classroom to the hallway, while Willum was locked in another room. Deadnaming is the act of referring to a transgender or nonbinary person by their birth, given, or former name without their consent.

“And the bullies are not facing any repercussions, but we are,” Willum said. “We are. We’re facing repercussions right now all because I stood up for what I believe in, and you know what I’m not ashamed.”

By that point in the recording, another police officer had entered the hallway, causing Willum to grow more concerned. Willum claims the assistant principal said he was being “threatening” and “combative.” Apparently, he used profanity while sticking up to the bullies.

Viewers took to the comments to send supportive messages to Willum and his classmaate.

“They will always label Black folk standing up for themselves and others as violent and combative. They paint demanding fair treatment as violence,” one TikTok viewer commented. Another said, “They call the cops when they don’t have answers.”

But Willum wanted to know what was going to happen to the bullies—“Oh nothing.”

“So y’all just wanna focus on what people said instead of dealing with the problem at hand when people don’t feel safe in school and they literally threaten her life?” Willum asked.

He appeared worried for the trans student, mentioning the life expectancy of Black trans women.

“This is what it feels like to be Black and be part of the LGBTQ+ community in Knoxville, Tennessee at a Knox County school. This raggedy ass school. I can’t fucking stand this school.”

Viewers were just as shocked and outraged as Willum.

“Are you serious? Schools can NOT do this,” one viewer commented.

“Kinda ironic how schools preach about no bullying yet in most cases they discipline the people who speak up while the bullies are just given a -” another user said.

Haun did not immediately respond to the Daily Dot’s request for comment. The Daily Dot could not reach Willum.