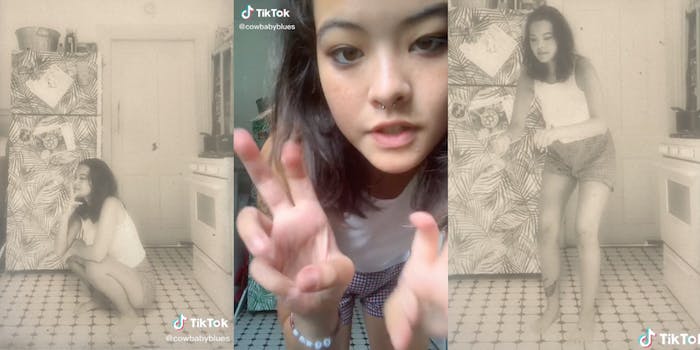 'Notice how [white] people don’t photograph their own neighborhoods??'

An Asian TikToker called out white photographers for taking photos of people in the Chinatown neighborhood of New York City. The user, whose name is Maggie, posted a video with a caption that said, “Photography can be so exploitative.”

Maggie starts the video by positioning their phone to capture their whole body. Then, Maggie says, while crouching down and pretending to smoke a cigarette, “OK, but who is gonna tell white New York photographer film b*tches that taking photos of old Asian men in Chinatown going like this, or old Asian women pushing carts like this in black and white, is not the high art they think it is and not cool.”

The TikToker, who has nearly 100,000 followers, finishes the video by saying that the subjects of the photos could be someone’s grandparents. “Like leave that b*tch alone,” Maggie says.

The video, which currently has over 139,000 views and over 38,000 likes, prompted a conversation in the comments section about the exploitative nature of photographing a community or region of the world one doesn’t belong to.

Another TikTok user commented, saying how the same is also done to unhoused people. “It feels so weird seeing people post pictures of homeless men just sleeping on the sidewalk. Like babes, it’s exploitative,” they said.

Multiple comments came from photography students who said their professors were against this kind of work. “One time, my photography teacher made this white girl cry in critique because all of her photos were of houseless people, and she hadn’t asked their permission,” a user replied.

Maggie did not immediately respond to the Daily Dot’s request for comment.