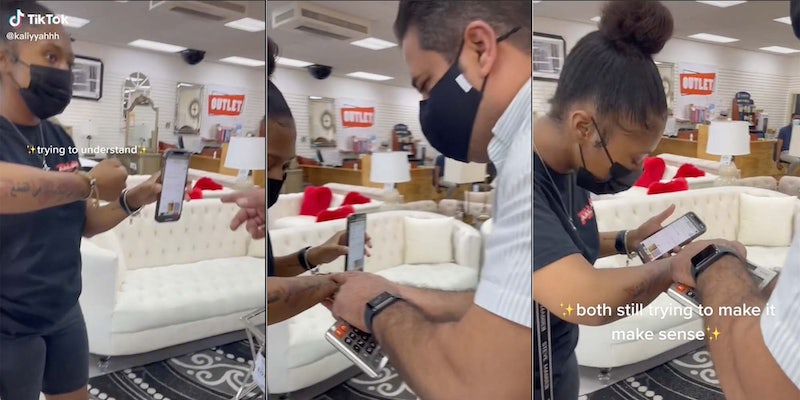 In a viral TikTok video, a woman can be seen showing her tattoo, which is written in Arabic, to Arab salesmen at a furniture store.

“It’s not making any sense,” one of the salesmen says to her.

At that moment the woman seems to realize her tattoo is a fail.

The woman asks if her tattoo might be written backwards. “Honey,” the salesman says before explaining to her that Arabic is written from right to left.

“If you can, just take this out and make something different,” the salesman tells her, pointing to a section of her tattoo.

The video was posted on Sept. 7 by TikToker @Kaliyyahhh. It has amassed over 1 million views since.

In a comment on the video, @Kaliyyahhh clarified that the woman knows what the tattoo means to her and that her friends “think it’s still cute” and that they “always joke about it.”

A commenter that identified herself as the woman in the video, @loverenai, said that her tattoo says: “Be at peace, not in pieces.”

“It was just one dot that messed up the Arabic,” commented @loverenai.

Other commenters shared similar stories about tattoos that didn’t quite translate to what the recipient had wanted.

“Someone I know got a ‘dance and movement’ tattoo in Chinese,” wrote @mikaelaxbaker8. “Then he found out it says ‘warm water.'”

The comment is reminiscent of Ariana Grande’s “BBQ Grill” tattoo, which she eventually got fixed.

The Daily Dot has reached out to @Kaliyyahhh via TikTok comment.