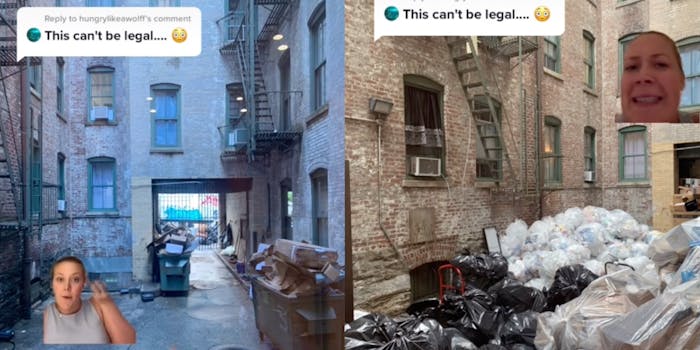 ‘Health code violation. You can break your lease without penalty’: TikToker’s video on window view she was promised vs. view she got goes viral

'If there's a fire, all of these people are just going up in flames.'

A New York TikToker’s video featuring window view she was promised versus view she got has gone viral, garnering over 414,000 views and plenty of housing advice from other TikTokers.

“This is the view that I saw outside of the window when I toured the apartment back in August,” @notfromdenmark, or Carol, begins the video. “I toured it on a Monday night; Monday is the day that they take the trash out here, apparently.”

The view is of an alleyway. It’s empty in the August image and full of trash—with no apparent wiggle room—in the September image.

“At no point in the entire process did they mention this is where they store the garbage. It wasn’t in the lease, but they didn’t mention it when I toured, never. I was emailing them multiple times before I signed a lease. I emailed them about this the first week I was there, because, first of all, it’s gross. I don’t want that there; that’s embarrassing, even though I’m sharing this on TikTok right now,” she says.

She explains the safety issues created by piling garbage in this area.

“Also, please notice, this is my fire escape,” she says, gesturing to to the railing. “I don’t have another window to a street or anything. This is how I’d escape in a fire. I have no means of egress. If there’s a fire, all of these people are just going up in flames with all the cardboard and trash in here. So, I don’t think it’s legal.”

Some commenters offered advice regarding who she could call in order to put some pressure on the landlord to remedy the issue or let her out of the lease.

“If you’re in NYC call 311 and say that your landlord is blocking the fire escape in a ‘multi family building’ to the extent that no one can use it,” one commenter wrote.

Other commenters joked about her having a soft place to land——in the trash——if she ever had to jump from the fire escape to reach the ground.

The Daily Dot has reached out to @notfromdenmark via TikTok direct message regarding the video.