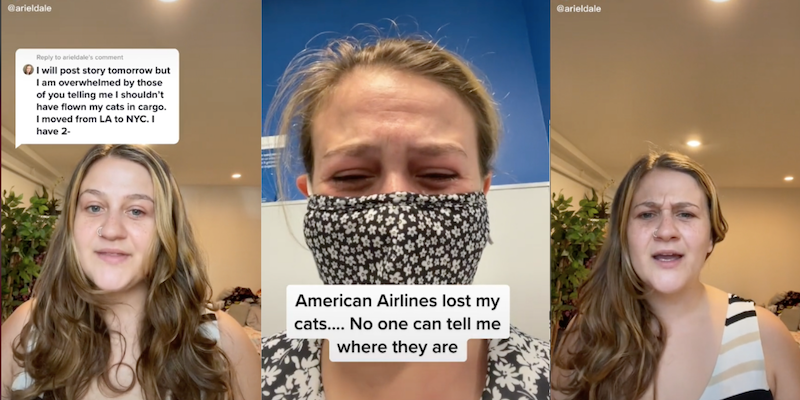 ‘No one can tell me where they are’: American Airlines loses TikToker’s 2 cats (updated)

'While I understand mistakes happen, the bare minimum American could have done was apologize.'

American Airlines lost a woman’s two cats and she posted about the situation on TikTok.

User Ariel Dale, @arieldale, first posted a video on Sunday of herself crying at John F. Kennedy International Airport with text that read, “American Airlines lost my cats, no one can tell me where they are,” as Elton John’s “I Think I’m Going to Kill Myself” played in the background. The caption of the video said, “This is actually my worst nightmare. They’ve already been in the kennel for over 14 hours [because] their flight was canceled.”

That first video gained over 3.1 million views and thousands of comments supporting her through the ordeal. There were also many comments of people asking for an explanation as to how this happened and an update on whether or not she was able to get her cats back.

On Monday, Dale posted a three-part storytime to explain the entire situation and how she managed to get them back. In the first part, she explained that she put her cats on a cargo plane in her move from Los Angeles to New York City. It was a difficult decision for her to make, but she thought it was the best way to fly them cross-country given the cats’ extreme anxiety around people.

The first red flag for Dale was when they told her the wrong location to drop her cats off and because of this, she almost missed her own flight. “I made it to my flight with like two minutes to spare,” she said.

Dale said as she’s about to take off, she received a text saying her cats’ flight was delayed, then canceled, and later rebooked.

In part two, she explained that the new flight ended up getting delayed. After she landed, she was put in contact with an agent from American Airlines who assured her that the cats were fine and that they were “being well taken care of.”

Dale shared a screenshot of the confirmation email she received on where to pick up the cats. She arrived at terminal 4, which ended up being the wrong terminal, and made her way to terminal 8. When she got to the pick-up location, the employee said they didn’t have any cats and she started crying. She explained that she was frustrated and thought about how stressed out her cats must’ve been.

Finally, in part three, she talked about getting her cats and how they were very stressed out upon arrival.

Once she got them in the car and back to her new apartment, she spoke about how moving them into a new space is stressful in and of itself. With this experience on top of it, she said, “This whole situation is just bad.”

In an emailed statement to the Daily Dot, Dale said that her experience with American Airlines was “awful from start to finish.” She continued, “While I understand mistakes happen, the bare minimum American could have done was apologize. I paid over $700 for the safe transportation of my cats and have not received an apology, explanation, or offer of compensation.”

She said she was told to file a claim online and should be receiving a response within 15 days.

“Thankfully my cats are home safe now but we are all traumatized from the experience,” she told the Daily Dot. “We are grateful for the love and support from people online.”

Update 12:14pm CT Aug. 4: In a statement to the Daily Dot, American Airlines stated its representatives were “in regular contact” with Dale about her cats journey.

“Caring for our animal travelers and ensuring they have a smooth and safe travel experience is always a top priority for us,” Yamleque Murillo, operations communications specialist, wrote in an email. “We never like when travel plans are disrupted and are sorry for any inconvenience.”