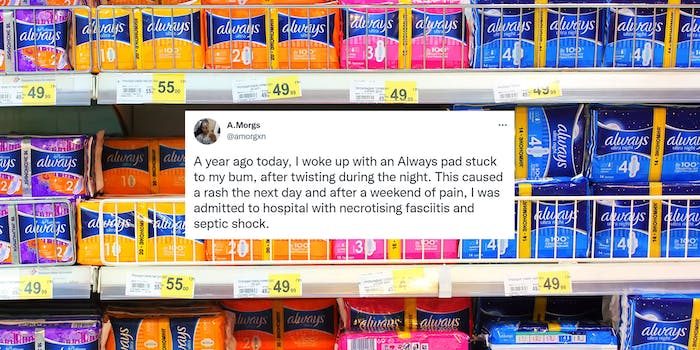 A woman has taken to Twitter to share her bad experience with Always menstrual pads that she says left her in the hospital for more than a week, requiring surgery.

@amorgxn writes in a thread of tweets that she woke up with a pad stuck to her, and a rash that formed in the area sent her into septic shock.

“A year ago today, I woke up with an Always pad stuck to my bum, after twisting during the night,” she wrote. “This caused a rash the next day and after a weekend of pain, I was admitted to hospital with necrotising fasciitis and septic shock.”

She writes that she began to experience difficulty breathing and other symptoms that left her in such a state that her doctors thought she would not survive emergency surgery. @amorgxn wrote that she was stabilized with a blood transfusion and medication before having the infected tissue removed.

“I spent a total of 10 days in ICU and 7 days on the regular ward,” she wrote. “In September I had a follow up skin flap surgery to close the wound of the original surgical site.”

“I’ve seen a lot of women in Africa complain about how terrible Always pads are,” she wrote. “Pads that I had been using in the UK for 14 years with no issues. I will never use their products again (not that my period has returned since then), and I advise all women in Africa to do the same.”

The thread drew empathetic responses from other Always pad users who said they had also had negative experiences with the product.

“I always got yeast infections when I used Always pads,” one Twitter user wrote. “I don’t trust their shit.”

“I noticed when I use Always pads that I would get a bad, painful rash,” another user wrote. “It’s not just that they’re bad in Africa, they’re bad product.”

“I’m so sorry to hear this,” a commenter wrote. “I also stopped using their pads officially [two] years ago. I have always used Always Pad and thought my stinging itching during period was normal not until my friend told me it wasn’t. Stopped using them and it’s been fine.”