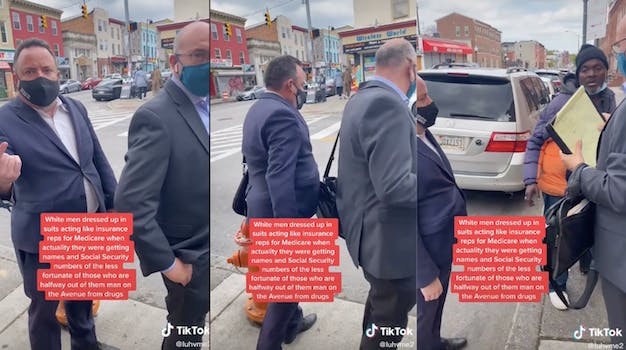 'All we did was ask them for a card and they got really defensive.'

A Baltimore man posted a video to TikTok alleging that two middle-aged white men in suits pretended to be insurance representatives for Medicare and were asking for people’s names and social security information.

In the video, one of the suited men suggests the two leave after the man starts filming them. The filmer also notes that his friend asked the duo for their business card. As they’re leaving, the alleged Medicare representative tells the man recording that he cannot videotape him without his permission. The man behind the camera denies that’s true.

Since being posted in April by @luhvme2, over 179,000 people have viewed the video and over 20,000 people have liked it. The video seemingly recently appeared on many people’s “For You” page as comments from late June appear in the video’s comments section.

The video’s narrator adds context throughout the video via text. One text box reads, “All we did was ask them for a card and they got really defensive. He told us that if we’re not on Medicare then we don’t need a card.”

It continues to read, “My friend told him his mother needs it and he said ‘I don’t think so.’ It would not give them a card so that’s when my camera came on.”

Many of the comments thanked the TikToker for raising awareness about the alleged scam. “They need to have a task force to tracking those men down ASAP. This is awful. Just wrong,” one comment read.

Update 3:10pm CT, July 8: A Centers for Medicare and Medicaid Services CMS spokesperson told the Daily Dot in a statement that Medicare-related scams—including people claiming to be Medicare representatives in-person—have been on the rise during the coronavirus pandemic. They added that senior citizens, in particular, are susceptible to being targeted by such scams.

They also said that Medicare will never ask anyone for their Medicare number and personal information unless the person has given pre-approval.

They warned people to not give out their Medicare card and number as well as social security card and number to anyone except those who should have them, like doctors, and instead treat them as if they were credit cards.

The Daily Dot reached out to @luhvme2.