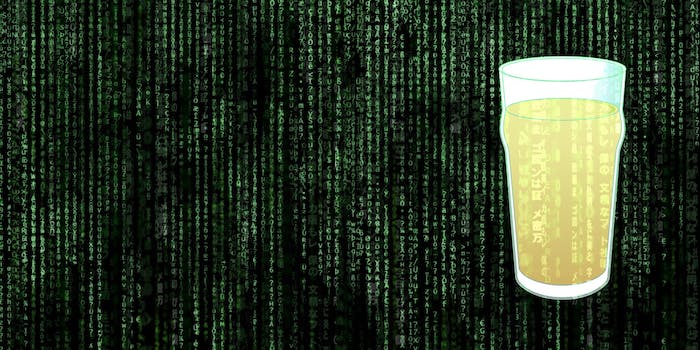 My adventures in DIY Soylent, the drink that wants to replace food

You can survive on nutritious liquid for less than $4 a day.

There’s a scene in the movie The Matrix that I’ve always loved—OK, there are a lot of scenes in that movie that I love, but one specifically. Neo is given a small serving of a goopy, pale substance and is told that it’s “a single cell protein combined with synthetic aminos, vitamins, and minerals.”

In the film, it’s a convenient excuse for why you never see the last living humans starving on their hovercrafts, but back here in reality, I found the idea of a singular food source to be a crazy, amazing idea. That’s exactly what Soylent is.

Originally introduced in a crowdfunding campaign, and named after the 1973 dystopian thriller Soylent Green, Soylent has been called everything from “the end of food” to “punishingly boring.” It arrives at your door as a beige powder that you mix with a small amount of oil and water to create a similarly beige liquid. The resulting beverage is nutritionally complete, meaning that it can entirely replace your normal diet, and you’ll still be getting at least 100 percent of every recommended vitamin and mineral.

Arriving in portioned bags and costing as little as $8.50 per day, the official product is designed to be as convenient and affordable as possible. This hook has made Soylent extremely popular. New customers can expect to wait a minimum of four months for their first shipment to arrive, and potentially much longer if their order is relatively small.

Not satisfied with the wait—or in some cases, the taste or cost of the official Soylent—many individuals dreaming of a post-food future have dreamt up their own do-it-yourself versions. After all, Soylent isn’t some sort of magical substance conjured up out of thin air; It’s simply an efficient delivery method for the vitamins, minerals, and calories we already know we need to survive, and you don’t need to look far to find supplements, powders, and oils that make up a complete nutritional profile. 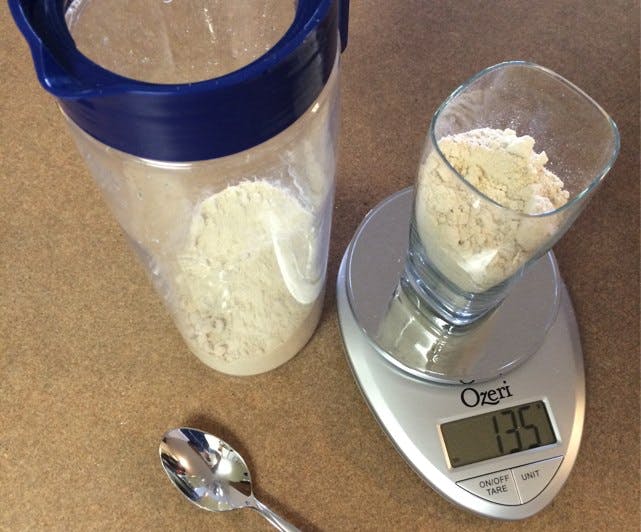 Rosa Labs, the company behind Soylent, has fostered the DIY Soylent project itself, despite the obvious potential impact on sales of the official product. The company treats Soylent as an “open source” idea, and encourages experimentation, which is exactly what the bustling community of DIYers have been doing.

I’m quite impatient myself, and though I wasn’t confident enough to get in on the ground floor of the un-food movement, my eagerness to try a liquid diet spiked once I discovered I could create my own while avoiding a ridiculous wait time. I decided to give the DIY Soylent thing a go; why not? Get healthier, convenient meals, and try the trend without having to wait for anything.

So, I started with the most popular DIY Soylent recipe: People Chow 3.0.1.

After buying about a month’s worth of each ingredient—which, in retrospect, was a bad idea—I made my first batch. Corn flour, whey protein, a GNC supplement powder, and some odds and ends gathered in a large bowl and mixed with water all went into the blender to formulate my first homemade Soylent beverage. I chilled it overnight and awoke the next morning excited to try it.

I’d read from the comment on the recipe that it tasted like tortillas thanks to the corn flour base, and though I was prepared… the flavor seriously surprised me. The vanilla flavoring of the supplement powders gave the drink a pleasant taste overall, and as I sipped that first glass I almost convinced myself that I could tolerate it. Almost. What really killed it for me was the gritty texture. No matter how much water I added—which, by the way, is a matter of preference even when using the official Soylent powder—I still felt the coarse corn flour sticking in my throat. I couldn’t handle it. Many comments on the recipe praised this quality, but for me it was a turnoff.

There are well over 2,000 DIY Soylent recipes available for easy browsing, so finding a replacement was easy. I experimented with recipes that include psyllium husk powder, flax seeds, cocoa powder, and soy protein. With each new recipe came a new texture and taste, but I couldn’t shake the feeling that my first recipe would have been perfect if not for the horrendously sandy texture. What next?

After asking the much more experienced DIYers on the site, I found that I could simply replace the corn flour in my first recipe with something more agreeable. Using another popular recipe called “Bachelor Chow,” I noticed that oat flour was a popular choice. I swapped the oat flour in, tweaked the amounts of a few other ingredients to balance out the nutritional profile, and mixed. The first sip was fantastic, and after finishing a tall glass I realized I could drink it every day.

My new and improved drink had the consistency of a milkshake and tasted like vanilla oatmeal. It’s smooth, and while I didn’t add enough water to make it super runny, I could still drink it in gulps and not have to stop to “chew” it in between mouthfuls. I love oatmeal in general, so it wasn’t a taste I’d likely get sick of anytime soon, which is key. Onward I went.

My recipe still wasn’t perfect. I was ony getting 99 percent and 94 percent of my daily recommended dose of Potassium and Sulfur, respectively. However, I doubt my normal diet of frozen pizza and Starbucks coffee hits anywhere near those numbers, either, and I was willing to risk the minimal deficiency in order to have a drink I could actually tolerate. Here’s how my recipe turned out:

That is an entire day’s worth of what it takes to keep a body running, according to the recommended allowances set forth by the U.S. government.


There’s more to this diet than the drink

While my recipe is almost nutritionally complete, the fact that it offers all the components of a well-balanced diet doesn’t mean that switching over to a Soylent-only diet is a simple task. No, Soylent isn’t some cure-all for hunger, and although I managed to make it through a number of Soylent-only days without caving, there’s no denying just how hungry I got during those trials. All the vitamins, minerals, and manufactured calories in the world couldn’t save me from craving a real meal by the time each day was done, and there’s nothing I could do to curb it.

I don’t mean to make Soylent sound like a bad idea, because there were quite a few things I absolutely loved about it.

For starters, I felt fantastic nearly every day that I devoted to the enriched liquid. Hunger aside, my body felt like it was running on all cyclinders. The afternoon drowsiness that I so often fall victim to was gone, I had a ton of energy to hit the bike trail even after a long day working, and my mood was noticeably elevated. This is no doubt due to a full compliment of vitamins and an absence of fast food and other substances that I embrace purely for the taste. It was a bit like flipping a switch.

And in complete honesty, my bathroom visits didn’t change in any noticeable way, and since my Soylent recipe includes plenty of fiber, I didn’t expect them to. The first day or two I did battle with occassional headaches, which is something many DIY Soylent users attribute to one or more of the vitamins suddenly being introuced to the body in an adequate quantity, but they were nothing a couple of pain pills couldn’t cure. All told, my body seemed to thank me for providing it with everything it needed to perform at its peak.

According to the Amazon price of each of the ingredients, a day of drinking Delta Chow costs less than $4. Fetching all the ingredients locally will likely cost significantly more, but I imagine the recipe is at least as affordable as the official Soylent powder, if not cheaper. 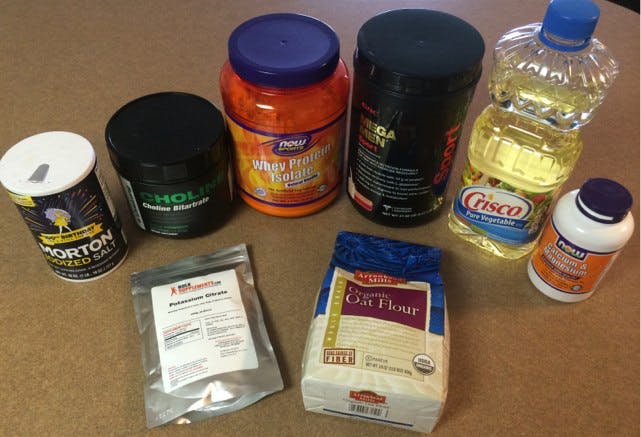 I wasted a ton of cash on finding a recipe I liked. I have a shelf full of corn flour I’ll probably never use and a bunch of magnesium caplets I no longer need. That’s probably a small price to pay for what was essentially my Soylent “growing pains,” but it’s something to consider if you’re interested in doing this yourself.

Where Soylent could fit into your life, if at all, is something you won’t know until you try it. I had convinced myself I could completely ignore food if I just had a nutrition source like that infamous slop from The Matrix, but the transition is different in practice than in theory.

Now that I’ve discovered a recipe I can tolerate, I’ve gone on Soylent-only stints for days at a time with overall positive results, but it’s not something that can completely replace food for me. Even something as simple as a banana is like an exotic adventure when you’ve been existing on an oatmeal shake for a few days, and the temptation is simply too much for me.

In terms of convenience, mixing your own Soylent is a bit of an ordeal. It’s made significantly easier with a digital scale, but it’s still a sizable time investment. You make up a bit of that time throughout the day, however, as your meals are now in liquid form, but it’s not the easiest thing in the world. Getting the powder delivered to your door would definitely make things a lot simpler, which is part of the appeal of the official Soylent product, and something I look forward to experiencing whenever my order arrives.

But all told, there’s something especially strange about giving up solid food in favor of a liquid, and I couldn’t help but think it has something to do with habits rooted deep within humans as a species. Humanity, as far as we know, has never subsisted entirely on a liquid of any type, and as the hours ticked by and days gave way to hungry nights, I felt a pull to eat something—anything—that would let me utlize my teeth for their primary purpose.

You don’t realize just how much you enjoy chewing solid food until you’re asked to go without it for a signifcant amount of time. Even when I had a stomach full of nutrious Soylent, something deep in my core felt unfulfilled. As ridiculous as it sounds, it felt as if my hunger took a backseat to the physical need to chew, swallow, digest, and—for lack of a better phrase—feel like a human being.

Was it simply the force of my everyday eating habits manifesting in a malaise? Perhaps, but that didn’t make it any less distracting, and whenever I tackle a piece of fruit or sandwich after a Soylent stint it’s as if I’m silencing a nagging part of my soul that can’t be quieted by anything else.

In the end, Soylent isn’t really “the end of food.” It’s more like a tool. You can use it when you need it and ignore its existence when it doesn’t fit into your lifestyle. There are many people living entirely on Soylent—including its creator—but you shouldn’t force yourself to follow suit.

If you’re interested in Soylent, try making your own before throwing down the cash for the real thing. If it fits for you, you could be a harbinger of humanity’s liquid-only future. If not, you can leave the idea of ultra-nutritious goop to the sci-fi crowd and go back to BLTs and BBQ wings.

Photos via Wordpress and Deviantart | Remix by Max Fleishman