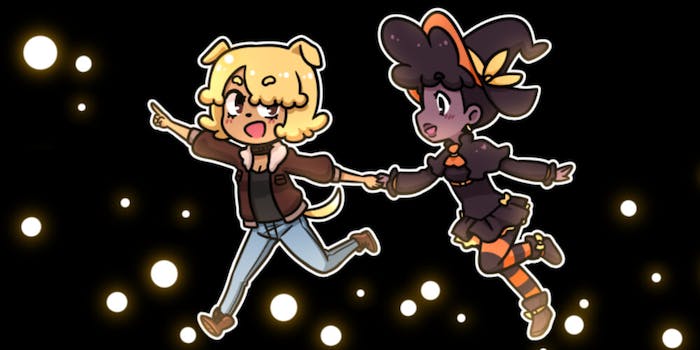 It’s not clear why, but over the past several years, there’s been a boom in spooky romance games.

Of course, some people have always enjoyed monster love (see also, the many versions of Dracula). Maybe The Shape of Water made it cool again. Whatever the reason is, we’re not complaining. We’ve collected 13 spooky romance games to get you in the spirit no matter the season, ranked from cutest to creepiest for your ease of exploring.

One day, a girl named Lilac turned gray, and everything she touched (except her lamp) turned gray, too. She hid away inside for more than a year, afraid of what would happen if she touched a living being. Then one night, a witch knocked on her door and convinced her to come outside with the promise of a curative potion in exchange for a place to sleep. In about 30 minutes, this simple RPG Maker game can break your heart and rebuild it, as Lilac and the strange traveling witch Chime work together through the mysterious Witching Hour to bring back Lilac’s color. Find Lilac & Her Light on itch.io and Google Play.

2) First Kiss at a Spooky Soiree

Originally released in 2016 as a submission to the second annual Yuri Game Jam, First Kiss at a Spooky Soiree is lethally cute. Play as Marzipan, a witch determined to get her first kiss at this spooky soiree, and flirt with pixies, demons, cat and puppy girls, the undead, and more. The iconically adorable art and catchy tunes have kept people coming back to this visual novel for years—and not just during spooky season. And if you’ve already played it and loved it, you’re in luck: The game’s creator, NomNomNami, released an update Oct. 1 with three new endings. Find First Kiss at a Spooky Soiree on itch.io and Google Play.

If you’re looking for a video game to facilitate romance and monsters, look no further than Monster Prom. This multiplayer dating sim features a wide cast of romanceable monsters, each with their own quirks and terrors. Settle in with a hot cider cocktail and your significant other(s)—and prepare for some competitive courting. The goofy and flirty tone, along with the opportunities to help or hinder each other, make this a great game for romantic nights in or double dates at home. The sequel, Monster Prom 2: Holiday Season, is expected in October 2020, but there are thousands of scenes to discover in the original version while you wait. Find Monster Prom on Steam.

Can you survive a week at Creature Academy? In Love Hunt, you play as a human who foolishly faked their way onto the monster side of public education. Your curiosity got the better of you, and now it might be fatal. You’ve got a week before the Halloween dance to find a classmate who will date you—that is, if they don’t eat you first. The game doesn’t have any sound, but the writing is funny, and the art is vibrant. The suitor that cannot be missed is Todd Howard, a vegan wendigo who really wants to be Instagram famous. Play Love Hunt on itch.io.

Laika is just your average young adult werewolf. She has way too much student loan debt, she works tech support in a tiny cubicle, and every full moon she totally loses it and makes a huge wreck of whatever is in her way. Her life has always been a little out of control, but her best friend, the nymph Daphne, has always had her back. That is until Laika’s new coworker, a sexy succubus named Victoria, flips her world upside down. The art, especially the character design, makes this visual novel stand out among a sea of lesbian monster games. Play Loan Wolf on itch.io.

In this magical and inclusive visual novel, play as Avery Grey, a 20-something just trying to get their life going. After months of jobhunting, they finally get a job at the Cat’s Paw cafe working for the mysterious owner, Graves. It seems too good be true for a reason: All the employees are cursed to transform into cats whenever they leave the cafe. When Avery finds a grimoire in the basement, they resolve to find a way out of the curse at all costs. But as they get to know the cats and people of the cafe, the nature of the curse only becomes more complex. With a catchy soundtrack and a charming cast, Hustle Cat will keep you coming back looking for answers and romance. Find it on Steam and itch.io.

A short but charming text adventure game, Kiss the Ghoul has you play as an “average” young adult on a dating app for fans of the paranormal. Also, you’re an exorcist and you exorcise demons with the power of kisses. You’re not really looking for love, save unsuspecting hosts of demonic presences. You can’t remember the last time you kissed a person for affection. If you take the right path, that could finally change. Play Kiss the Ghoul on itch.io.

It’s not easy to find love in the afterlife. But apparently, all kinds of ghosts come to speed dating: the unknowable monsters, the young tragic deaths, the righteously vengeful spirits… and you. There are 12 ghosts in total, and with each playthrough, you can meet three and go on a date with one. The character designs are evocative of the life and death of each ghost, such as an athlete with a ball lodged in his head or a spirit pouring smoke from chutes on her back. Each ghost offers a very different experience—some goofy, some touching, and of course, some creepy. Find Speed Dating for Ghosts on itch.io and Steam.

In Kill Your Darlings, you’ve been invited to the Unholy Masquerade—“a night of decadence, perversion, and mystery.” There will be feasting and drinking and creatures of the night slinking away together into the darkness to indulge their lust. There are three romanceable beings in this short visual novel, and every moment you spend with them reveals more questions than answers. They say the Baneful Valentine is coming to this affair, but no one knows what they look like. All anyone knows is that the Baneful Valentine brings death, and their victims always go willingly. Choose wisely. Find Kill Your Darlings on itch.io.

10) Meeting in the Flesh

Step into the world of Vil, a salt delivery person who always has a pep in their step and a friendly greeting for everyone on their route. The worldbuilding of Meeting in the Flesh is where it shines brightest. Although the world is strange, it never feels bizarre for the sake of it. The ground outside the city ripples with fat, where your werewolf friend may show you a gaping, blood-filled pore he feels compelled to explore. Another friend, the community overlook, attaches to a giant tower of flesh and eyes to keep watch over the city. The beekeeper is a gruff but kind mass of tentacles and teeth. Each of them wants to share a special secret with you during the eclipse, as it is said that any new endeavor you undertake during the eclipse will be successful. Meeting in the Flesh will break your expectations of romance—and keep you wanting more. Find it on itch.io.

In a small town in the Japanese countryside, a young man works in the little shop he inherited from his father, building and repairing dolls. The days are quiet, and the snow is heavy. He keeps busy with work and his butterfly collection. When a childhood friend visits her grandmother and accidentally breaks a doll, he sees a rare opportunity to connect with a woman his own age. But can he really trust her? This spooky point-and-click game features gorgeous watercolored graphics, but don’t be fooled—there’s darkness just under the surface of the village. Find The Doll Shop on itch.io.

This dark tale of queer youth plays with the Christian fear of sin and the Devil, and the closeted queer fear of the self, to create an unforgettable story. The spooky game follows three teens at a Christian summer camp where “bad” teens are sent to do combat with the Devil. The interaction is minimal, but each one illustrates how small decisions shape relationships and that someone is almost always left out. As the story escalates, it moves from teen angsty flirting and bullying to wailing sirens—and the Devil begging to be let in. Play We Know the Devil on itch.io and Steam.

Experience a slice of the life of Leo, a young nonbinary person trying to figure everything out. That becomes much harder when a new, mysterious housemate moves in and immediately sets her eyes on Leo. Her name is Dagger, and she quickly gets Leo involved in dark and confusing rituals, explaining little and always demanding more. But Leo can’t stop coming back. Everything from the black and white art to the electronic soundtrack reinforces the dark and erotic atmosphere of this emotionally intense story that is just as much about friendship as it is about kink and occultism. Find Knife Sisters on Steam and itch.io.