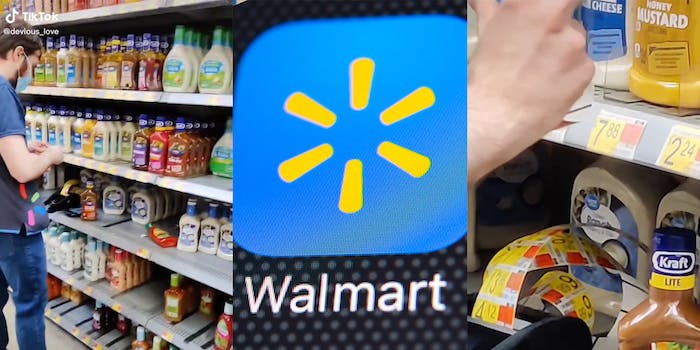 In a viral TikTok video, a user films a Walmart worker adding a new price to salad dressings, sparking debate about inflation and price-gouging in the comments.

The video, shared by Shawn Connor (user @devious_love), shows the Walmart employee replacing the $2.24 price tags on salad dressings with $7.88 tags, more than a 350% increase.

Connor added a sound featuring lyrics from Nardo Wick’s “Who Want Smoke?” which repeatedly asks, “What the fuck is that?”

The TikTok garnered over 2.6 million views, with thousands of comments speculating about the price change.

Several users argued that the price increase was a result of increasing gas prices, which have inflated after President Biden announced a ban on Russian energy exports on Tuesday, according to the New York Times.

“Called inflation.. gas prices go up cost of food is going to go up [companies] are requiring more money to ship food and the company that’s selling it….,” one user said.

However, others speculated that companies are utilizing the Russia-Ukraine conflict to justify price increases used to increase profits.

“They will use this crisis to increase profits,” another said.

“Wildlinnnn! This is corporate greed pure and simple,” a third user said.

One user argued that the worker could simply be setting up prices for different products to be placed in that aisle. “He’s probably making a new planogram and something else is going to go on that shelf,” they said.

However, others said they’ve seen these price changes regarding salad dressings at their local Walmarts.

“My store manager told me to do this, the next day later she tells me to change the price back we not getting any sales,” one user said.

“Been this price at my Walmart in East TX for a week now… Was told it was a glitch but the price tags are still the same,” another said.

Some noted that their local Walmarts have not seen price increases for salad dressing.

“Not ANY Walmart around me has done this! And my son works at one and says it’s not happening to us,” another said.

The Daily Dot reached out to user @devious_love via Instagram messages and Walmart via email.